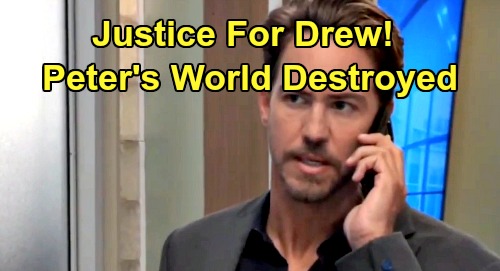 General Hospital (GH) spoilers tease that Peter August’s (Wes Ramsey) day of reckoning is looming. He seemingly confessed his secrets and put the past behind him, but fans later learned he’d left out a huge piece of the puzzle. Peter was evil Helena Cassadine’s (Constance Towers) accomplice, so he was far more involved in the memory-mapping mayhem than he’d let on.

Although Peter should’ve come clean a long time ago, it probably wasn’t too late during his recent chat with Maxie Jones (Kirsten Storms). She keeps driving home the point of how Peter has changed from the evil Henrik we once knew. She constantly praises Peter’s good qualities and assures him he’s not the man he used to be. Peter could’ve confessed like he planned, and Maxie probably would’ve been able to get past it.

However, Peter chose to keep his mouth shut. He’s going to regret that since he’s now teaming up with another baddie to keep things quiet. Unfortunately, Peter has no guarantee Shiloh Archer (Coby Ryan McLaughlin) will keep his end of the bargain. He could easily go to the trouble of helping Shiloh score his freedom only to get betrayed.

Between Peter’s Helena connection and this Shiloh shocker, Maxie would have two great reasons to reject him. Peter dug a bigger hole for himself since he made a phone call regarding Drew Cain’s (Billy Miller) latest mission. He insisted the person on the other end should make sure Drew never finds Andre Maddox (Anthony Montgomery), which led to Drew’s plane crash and Andre’s brutal stabbing.

On September 10, General Hospital spoilers say Peter will berate his minion over Andre’s survival. He’ll realize Andre’s still a threat to his happy life with Maxie, so he could take other steps to eliminate him. Of course, we’ve also got the mystery surrounding Drew’s plane. You can bet Jason Morgan (Steve Burton) and Sam McCall (Kelly Monaco) will work hard to get to the bottom of who went after Drew.

There are already questions swirling about the anonymous pilot as well as the link between Andre and Drew’s drama. How long before those questions lead to connected dots? Peter may think he can cover his tracks, but that only works for so long on GH. Sooner or later, the walls will close in and Peter will be exposed as the same evil Henrik he’s always been.

Will Robert Scorpio (Tristan Rogers) be the one to expose Peter? General Hospital has seemingly set him up as a nice option. Robert is the only character who just can’t buy this “Peter is a changed man” idea. He’s still highly suspicious, so he’ll have every reason to keep an eye on Peter and notice when other red flags pop up.

Naturally, this could turn into a team effort thanks to Sam, Jason and Damian Spinelli (Bradford Anderson). Mac Scorpio (John J. York), Jordan Ashford (Briana Nicole Henry) and Curtis Ashford (Donnell Turner) will all keep digging, too. Curtis doesn’t want to believe Drew’s dead – and he may not be. Peter could easily have Drew held captive somewhere, but the point is he’s responsible for Drew’s nightmare and his family’s pain. It’s clear that Peter deserves to pay!

General Hospital spoilers suggest Peter’s dark side will get even darker in the weeks ahead. Robert may help Maxie see the light with a nice assist from Jason, Sam and others fighting for justice. Will Peter’s exposure send his world crashing down around him? We’ll give you updates as other GH news comes in. Stay tuned to the ABC soap and don’t forget to check CDL often for the latest General Hospital spoilers, updates and news.