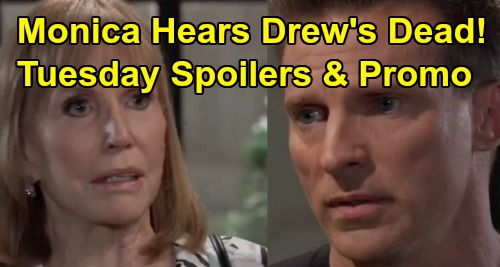 General Hospital (GH) spoilers for Tuesday, September 10, tease that Peter August (Wes Ramsey) won’t be a happy camper. He’ll get on the phone with his minion and demand to know why Andre Maddox (Anthony Montgomery) is still alive. Peter will fume over his incompetent lackey and wonder what his next move should be. Andre still has a target on his back, so he’ll have to be careful!

Meanwhile, Elizabeth Baldwin (Rebecca Herbst) will dish out some tough love. She’ll find Kim Nero (Tamara Braun) and admit she knows about the kiss in the park. Cameron Webber (William Lipton) spotted Kim locking lips with Franco Baldwin (Roger Howarth) and told his mom, so Liz will confront Kim on Tuesday. She’ll get that it’s a complicated situation, but she’ll think Kim’s only making her own pain worse.

Liz will remain optimistic that Franco’s going to come back to her. She’ll think Kim will just get her heart broken if she lets herself fall for him. Over with Franco and Monica Quartermaine (Leslie Charleson), they’ll get some heartbreaking updates. Jason Morgan (Steve Burton) just dropped by Franco’s hotel room to drop a Drew Cain (Billy Miller) bomb. Since Monica’s there as well, she’ll also get the scoop.

Jason will reveal that the wreckage of Drew’s plane was found, and there were no signs of survivors. General Hospital spoilers say Monica will be devastated as she wraps her head around the shocker. She’ll wonder if that means Drew’s dead, so Jason may give it to her straight. They can’t confirm that Drew’s deceased at this point, but the outcome certainly looks bleak on the surface.

However, Jason may raise the possibility that Drew’s still out there somewhere. They know someone was after him, so there’s always hope. Elsewhere, Josslyn Jacks (Eden McCoy) will get support from her big brother. Michael Corinthos (Chad Duell) will assure Joss that grieving takes a lot longer than you think. Josslyn will feel stuck as she continues mourning the loss of Oscar Nero Quartermaine (Garren Stitt), but Michael will promise things will get better in time.

At Charlie’s Pub, Julian Jerome’s (William deVry) showdown with Brad Cooper (Parry Shen) will get heated. Julian was furious as it slowly dawned on him that “Wiley Cooper-Jones” was actually Jonah Corinthos. GH spoilers say he’ll keep pushing until Brad has an angry outburst of his own.

Brad will admit he stole Sonny Corinthos’ (Maurice Benard) grandchild, but he’ll think Liesl Obrecht (Kathleen Gati) is the bigger problem. He’ll urge Julian to help him get rid of Dr. O and make sure Sonny never learns the truth. Julian will wonder what that means, so Brad will clarify that he wants him to return to the dark side. He’ll basically order a hit on Obrecht, which should leave Julian in shock.

Finally, Carly will want Sonny to admit something to himself. She’ll think it’ll be better for everyone if he does. This might involve some Dev Cerci (Ashton Arbab) issue or another crisis that arises, but Sonny will have trouble taking Carly’s advice!