General Hospital Spoilers: Liz Overwhelmed After Franco Comes Back to Her, But She’s Got Questions – Just How Much Does He Remember? 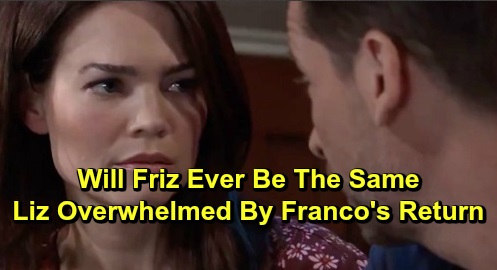 General Hospital (GH) spoilers tease that “Drew Cain” aka Franco Baldwin (Roger Howarth) will move forward with his plans. He’s been firm in his decision to undergo the memory reversal procedure and hopefully give Franco his life back. It took a while for “Drew” to come to grips with the fact that this life isn’t his own, but he finally reached that conclusion and intends to reunite Franco with his family.

However, “Drew’s” putting a lot on the line here. If he skipped the procedure and did nothing, “Drew” would be guaranteed of living a pretty normal life – as least as normal as life can be when your body doesn’t match up with your memories! The point is “Drew” could keep living this way and be guaranteed of survival.

With this risky procedure, “Drew” risks going into a vegetative state. He could ultimately be taken off life support and die. “Drew” could also become more Drew-like due to intensifying memories, which would bring a whole new set of problems. If he feels out of place in this body now, he certainly would with even more Drew memories.

Not to mention it’d put an even bigger target on “Drew’s” back! Peter August (Wes Ramsey) is already on edge and may consider sabotage attempt before this procedure gets underway. Nevertheless, “Drew” will still go through with this procedure. Andre Maddox (Anthony Montgomery) will carefully try to pull off the process he described. This memory stuff is tricky business!

Andre’s task consists of removing “Drew’s” memories so Franco’s memories can resurface. He suggested it was like when someone paints over a piece of artwork. There’s still a painting underneath, but it could be damaged in the process of removing what’s on top.

Once the procedure’s over, Franco will wake up – so that’s a nice start! From there, Elizabeth Baldwin (Rebecca Herbst) will be eager to find out what Franco remembers. Will Franco recognize his love? On December 9, General Hospital spoilers say Liz will be filled with deep gratitude. There’ll be so much in her heart that she can’t even begin to express it.

That certainly sounds like a woman who’s got her husband back! Liz will likely struggle to thank Andre for bringing Franco back to her. It sounds like he’ll remember who Liz is, but will he remember anything “Drew” related? What about the time he’s been living as “Drew” while Franco’s been out of the picture?

Those may be questions for Liz to ask – and she’ll indeed have some questions according to GH spoilers. There’s still a chance Franco’s memories could have some “Drew” moments mixed in. This isn’t a perfect process, so Peter won’t be off the hook just because Franco apparently returns.