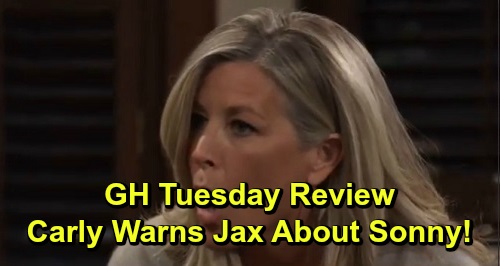 General Hospital (GH) spoilers review for Tuesday, December 3, reveal that Kendra Lennon (Michelle Argryis) was about to run over Alexis Davis (Nancy Lee Grahn) when suddenly Lucas Jones (Ryan Carnes) crashed the car carrying himself and Brad Cooper (Parry Shen) into her car. At this point, the paralytic had worn off and Alexis pulled herself up and went to Kendra’s car to check for a pulse, when suddenly Kendra grabbed Alexis and said “this isn’t over” before dying.

Meanwhile, at GH, Kristina Corinthos-Davis (Lexie Ainsworth) talked to Julian Jerome (William deVry) and Neil Byrne (Joe Flanigan). They filled her in on the Kendra situation, and using a tracking app on Kristina’s phone, they were able to locate Alexis’ location. Julian and Neil headed to the location, and when they got there, they found Alexis, who explained what happened, including there being another car that hit Kendra.

Neil then called for an ambulance while Julian searched for the other car. He found it and was horrified to see Lucas along with Brad unconscious in the car. Julian then rushed to Harrison Chase (Josh Swickard) and Jordan Ashford (Briana Nicole Henry), who were now at the scene, and told them that Lucas was hurt and in the other car involved in the accident.

Eventually, Neil and Alexis showed up back at GH, where Kristina was anxiously waiting. Kristina felt horrible, since her lie to Shiloh Archer (Coby Ryan McLaughlin) set this whole thing in motion. Alexis told her not to blame herself, and Neil took Alexis to get checked out. Once in a room, Alexis openly wondered who was in the car that hit Kendra and if they are ok.

Soon, Julian arrived at GH and got an update from Chase that Lucas was in surgery. That stunned Julian, who was horrified to hear that Lucas’ side of the car sustained the most damage in the accident. Chase noted that Brad was with an attending in a trauma room, but Julian didn’t really care about Brad, which Chase found intriguing. And at the accident scene, Jordan did a little investigating and realized that there were no skid marks on the road.

While all this was going on, Jasper “Jax” Jacks (Ingo Rademacher) stopped by the Corinthos house to see Josslyn Jacks (Eden McCoy), who turned out not to be there. Carly Corinthos (Laura Wright) left the room to get Jax some pie, leaving him alone with Sonny Corinthos (Maurice Benard). Sonny then told Jax that he didn’t have to keep pretending and that Carly had told him everything.

Sonny then needled Jax about his female houseguest and couldn’t quite understand how Jax would let some woman keep him from spending time with Josslyn. Sonny then got a phone call from Kristina who was at the hospital waiting for word on Alexis, so he left, leaving Jax with Carly. Carly then blasted Jax, saying that if Sonny ever found out about Nikolas Cassadine (Marcus Coloma), then he’d likely expose the whole thing.