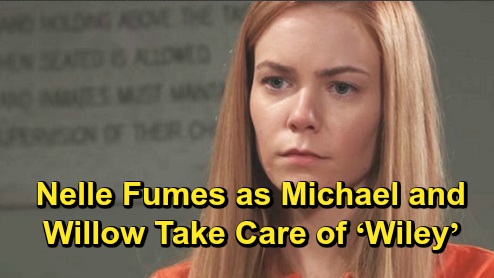 General Hospital (GH) spoilers tease that Nelle Benson (Chloe Lanier) will get a new cellmate, which should put her in the prime position to hear shocking information. GH fans know Cassandra Pierce (Jessica Tuck) was presumed dead in an explosion, so Sam McCall (Kelly Monaco) also needs a new cellmate. This is the perfect opportunity for several storylines to collide.

Sam obviously won’t be too pleased to be sharing a cell with Nelle. She was unnerved by Cassandra, but Nelle will probably be twice as annoying. Of course, Nelle can be pretty dangerous when she wants to be, but Sam won’t live in imminent fear for her life. Cassandra was the kind of gal you had to sleep with one eye open around, but Sam will likely view Nelle as a nuisance – at least at first.

Naturally, there has to be a reason Nelle and Sam will be stuck together. In fact, there could be several of them, but one is definitely Sam’s connection to Lucas. GH insiders suggest Harrison Chase (Josh Swickard) will pay Sam a visit at Pentonville to deliver the crash news in person. That should give Nelle a chance to hear the news, too.

Nelle should find out that Lucas is in a coma, but what about Brad Cooper (Parry Shen)? General Hospital spoilers say Brad will survive according to the same GH insiders, but he should still face some recovery time. That’ll leave Michael Corinthos (Chad Duell) eager to pitch in with his godson, “Wiley Cooper-Jones” (Erik and Theo Olson).” What Michael doesn’t know is that “Wiley” is really his bio son.

Nelle certainly knows that and should be unsettled when she realizes Michael will be caring for “Wiley.” After all, keeping Michael away from “Wiley” was the whole point of the baby swap. There’s a good chance Willow Tait (Katelyn MacMullen) will ultimately help Michael as well. Nelle may envision “Wiley’s” fake birth mom bonding with Michael over HER baby and decide she doesn’t like that one bit.

Will Sam pick up some weird vibes from Nelle? They’ll be living in close quarters, and Nelle struggles to contain her anger these days. Just look at how she behaved after her parole was denied. Sam also has experience as a private investigator and is a former con artist. You can’t con a con! Sam may realize Nelle’s hiding something – perhaps something related to Brad and “Wiley.”

This could allow the baby switch to come out another way or at least provide a little more drama while Lucas is in a coma. He knows “Wiley” is Jonah Corinthos, but his coma will prevent him from spilling the beans anytime soon. Could Sam figure it out and do it for him? Will Nelle take drastic action to make sure that doesn’t happen? Sam could find herself in grave danger if she’s not careful.