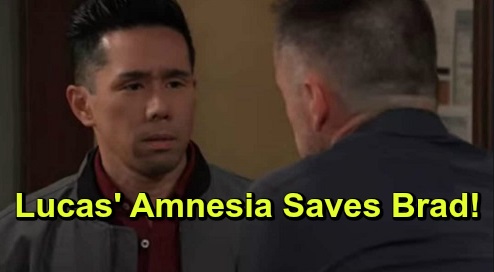 General Hospital (GH) spoilers tease that Lucas Jones (Ryan Carnes) will fall into a coma and leave his loved ones distraught. It’ll be tough to see Lucas helpless and without much hope at GH, but Carly Corinthos (Laura Wright) will refuse to sit back and do nothing. She’ll get in touch with a specialist, and it looks like it’ll be Dr. Griffin Munro (Matt Cohen) who answers the call.

Reliable insiders point to Griffin coming to Port Charles and working his medical magic on Lucas. It seems likely Griffin will succeed in bringing Lucas out of his coma – perhaps just in time for a Christmas miracle. Of course, Brad Cooper (Parry Shen) will be overjoyed to know his husband’s alive and will pull through, but we can’t forget that Brad blurted out quite a shocker before the crash.

Brad revealed that “Wiley Cooper-Jones” is actually Michael Corinthos (Chad Duell) and Nelle Benson’s (Chloe Lanie) son, so what happens once Lucas awakens? If Lucas indeed comes out of his coma by Christmas, perhaps General Hospital will do an amnesia arc to drag things out until February sweeps. That’d be the perfect time for the truth to finally be exposed to Michael.

Since Nelle and Sam McCall (Kelly Monaco) will be cellmates soon, that presents another opportunity for secret spillage. However, it’d have the most emotional impact if Lucas himself told Michael that “Wiley” is his baby. Unlike Brad, we’d like to hope Lucas would do the right thing and tell Michael about the baby swap. It would be heartbreaking, but it would further cement Lucas as another victim in all this.

When he awakens, Lucas may not recall what happened just before the crash. That’s quite common for victims of a serious accident. Naturally, that would present the opportunity for total recall later. Maybe this harrowing ordeal will bring Brad and Lucas closer before anything’s remembered. They might decide to let the past go and even renew their vows if GH wants to take things up a notch.

That’s when Lucas could ultimately recall the horrifying truth: the child he’s been raising with Brad isn’t his to keep. Michael’s the one who deserves the chance to be a father to “Wiley” aka Jonah Corinthos. Based on the speed of this story so far, Michael will hopefully be reunited with his son by at least that February sweeps timeframe we mentioned.