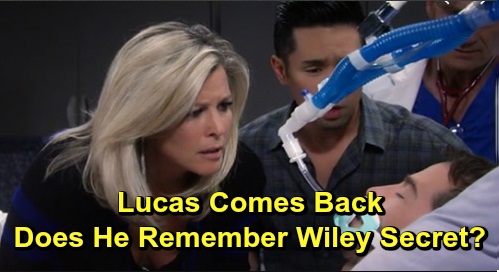 General Hospital (GH) spoilers tease that Lucas Jones (Ryan Carnes) may take a turn for the worse. During the week of December 23-27, Carly Corinthos (Laura Wright) will face a difficult blow. She’ll be incredibly upset and in need of comfort, which Sonny Corinthos (Maurice Benard) will gladly provide.

These two may have some issues thanks to the secret Carly’s keeping, but they always come through for each other when it counts. Sonny certainly won’t let Carly suffer alone. She’ll be right by her side as she potentially fears Lucas isn’t going to make it.

Of course, Carly won’t be the only one suffering if that’s the case. There’ll be plenty of other Port Charles residents who’ll worry that Christmas will bring heartache this year. If Lucas’ condition indeed takes a hit, that’ll leave Julian Jerome (William deVry) more remorseful than ever. He’ll feel terrible as he frets over his actions possibly killing his own son.

Bobbie Spencer (Jacklyn Zeman) will also be devastated along with Michael Corinthos (Chad Duell), who’ll fret especially for “Wiley Cooper-Jones” (Erik and Theo Olson) sake. All of Lucas’ family and friends should be counting on a miracle this year.

Naturally, it’ll be Brad Cooper (Parry Shen) who needs a miracle most of all. He loves Lucas and desperately wants him to pull through this – no matter the consequences. GH fans know Brad spilled the baby truth just before the crash. He blurted out that “Wiley” is actually Michael and Nelle Benson’s (Chloe Lanier) son, so that’s something that may remain in the back of Brad’s mind.

Brad surely knows that even if Lucas wakes up and recovers, he could lose him in a different way. Nevertheless, Lucas’ survival is obviously the priority here. General Hospital writers would’ve just had Lucas die in the collision if they were going to kill him off. Lucas will undoubtedly wake up – perhaps just in time to celebrate Christmas like Carly sweetly demanded.

The question is…how much will Lucas remember? The fact that he suffered a head injury isn’t a good sign if you’re hoping for a speedy big reveal. Lucas may end up battling some memory loss and not recalling Brad’s confession in the car.

General Hospital spoilers say Brad will be eager to see what Lucas recalls. He’ll be overjoyed once Lucas comes back to him, but then it’ll be time to find out how much Lucas still knows! We’ll give you updates as other GH news comes in. Stay tuned to the ABC soap and don’t forget to check CDL often for the latest General Hospital spoilers, updates and news.