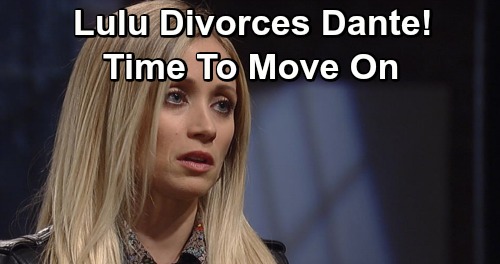 General Hospital (GH) spoilers report that Lulu Falconeri (Emme Rylan) finally got the answers she was looking for when Maxie West (Kirsten Storms) decided it was a good idea to barge into an unwanted meeting with Dante Falconeri (Dominic Zamprogna). Where will Lulu go from here now that she knows for sure that Dante is incapable of being a dad and a husband ?

Lulu is already on a dating site as research for her burglary investigation. Lulu has met several interesting men as a part of her investigation, and she seemed to connect with the latest one, Dustin Phillips (Mark Lawson) very well. Is Lulu attracted enough to Dustin to decide it is time to move on with her life?

Dante told Lulu not to wait on him, will she take his advice? General Hospital spoilers tease that Lulu may divorce Dante and actively begins searching for a new love.

General Hospital fans recall Dante told Lulu when he left not to wait on him. Dante realized that he is so damaged that he cannot promise ever to be well enough to come home. Lulu believed until this point that their love would bring Dante home.

However, Dante is not getting any better. The fact that Dante could fire a gun with Maxie standing that close to the person he shot has terrified Lulu. GH spoilers hint that Lulu is now convinced that Dante will never come home? Does Lulu need to find a way to move on without him?

Is Dante Safe To Have Near The Children?

Lulu has two children to consider – and Dante is extremely volatile at that point. Dante can go off at the drop of a hat, just like with Maxie, what would happen if Dante grabbed a gun around Lulu and the children? Dante cannot be trusted around the kids when he cannot trust himself in the room with adults.

GH fans must admit that it is completely too dangerous to have Dante anywhere near his family at this time. Dante may never be ready to come home so his family could never be complete again.

Is Divorce The Right Choice For The Family?

In this situation, General Hospital spoilers say Lulu could feel the best choice is to divorce Dante so that she and her children can have a normal life. The children need to have a father figure who is present, and Dante cannot be that person right now, possibly never.

Charlotte Cassadine (Scarlett Fernandez) has her father to be there for her, Rocco Falconeri (O’Neill Monahan) needs a father figure as well. Is Lulu’s dating app the right place to find a father for her kids?

Lulu may feel that she has no choice but to divorce her husband and move on from him since his mental issues make it impossible for him to be home. Will Lulu and her children be happy with someone new? Is it seriously time for Lulu to move on? Come back to CDL for all your General Hospital spoilers, news and features!