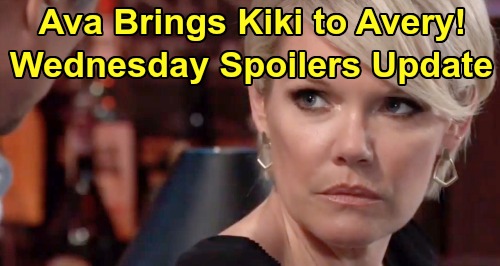 General Hospital (GH) spoilers update for Wednesday, July 17, tease that Liesl Obrecht (Kathleen Gati) will be feeling the weight of her secrets. As GH viewers know, Liesl is keeping two big identity secrets – one about the baby currently known as Wiley Cooper-Jones and the other about Nina Reeves’ (Cynthia Watros) daughter Sasha Gilmore (Sofia Mattsson). Neither Wiley nor Sasha are who everyone thinks they are, and the secrets may be starting to get to Liesl.

Before she was pushed overboard on The Haunted Star, Liesl had too much to drink and nearly spilled the Wiley secret to Franco Baldwin (Roger Howarth). Well, on Wednesday’s episode of General Hospital, it seems that Liesl will drop some hints to Nina about the baby possibly not being Shiloh Archer’s (Coby Ryan McLaughlin) flesh and blood.

This will likely puzzle Nina, and it looks like she and Liesl will argue about her statement. Nina will probably wonder why Liesl would be babbling about a baby she supposedly barely knows, and viewers may be wondering why Liesl would drop hints about one of her secrets to the very person she’s keeping another explosive secret about.

It seems that Nina will push Liesl, and as they’re arguing Liesl will get angry and threaten to “blow Nina’s house down.” At some level, Liesl is enjoying having her secrets, but on the other hand she seems to be starting to feel guilty about keeping “Wiley” from his real father – who, of course, is Michael Corinthos (Chad Duell).

Although the session didn’t really provide Ava an opportunity to make peace with Kiki, something interesting did happen at the end – “Kiki” requested that Ava pass on a message to Avery Corinthos (Ava and Grace Scarola). It looks like Ava will want to do just that, and so she’ll wind up trying to relay the message to Avery.

Of course, given Avery’s age, it’s possible that Ava will just end up upsetting her and causing Sonny and Carly Corinthos (Laura Wright) some real problems as a result. Sonny tends to be quite protective of his kids and he won’t like Ava coming in and stirring things up. He’ll be quick to put Ava on notice not to pull anything like that again…or else.