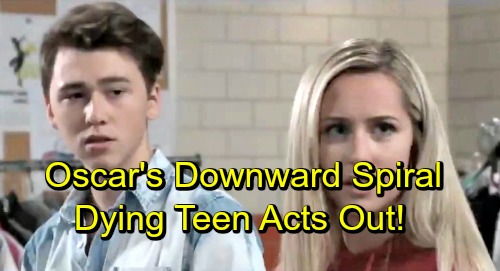 General Hospital (GH) spoilers tease that Oscar’s (Garren Stitt) diagnosis will put several characters in tight spots. GH fans know Drew’s (Billy Miller) already feeling torn. He doesn’t like lying when Oscar gushes about plans for the future. Drew knows Oscar may only have a few months to live, so the teen deserves a shot at making those months count.

However, Cameron (William Lipton) will end up feeling conflicted as well. He’s certainly had his fair share of issues with Oscar, but they’re trying to keep the peace. General Hospital spoilers say Cam will corner Liz (Rebecca Herbst) this week. Since he overheard Franco’s (Roger Howarth) comment about Oscar and saw the brain tumor website, Cameron will likely present his suspicions to his mom.

Liz may be forced to confess, but she won’t want Cameron spilling anything. Unfortunately, Cameron’s predicament could get worse thanks to Oscar’s behavior. Whether it’s through Cameron or just some detective work, Oscar may discover that he’s dying. On October 1, General Hospital spoilers say Oscar will push Drew away. He may be angry with his father for keeping this quiet.

Back with Cameron, he’ll find himself stuck in an awkward situation. GH fans can expect an argument when Oscar pushes Cam to lie for him. General Hospital spoilers say Cameron will refuse on October 4. Perhaps Oscar will realize he’s a goner and decide to do something dangerous. He could really go off the rails without even telling his parents what he knows.

Oscar may leave Josslyn (Eden McCoy) out of the loop as well. He could just use their bucket list plans as an excuse. They agreed to try lots of new things together, so Oscar could suggest something crazy. It sounds like he’ll struggle to process his imminent demise and all the loss that brings.

Later, Liz will get an unexpected visitor at GH. Cameron might choose to intervene before Oscar rushes himself to his death even sooner. He won’t want to see anyone get hurt, especially if Josslyn’s involved.

General Hospital spoilers say Kim will ultimately track Oscar down and demand an explanation. That might be when Oscar will reveal what he knows. This could lead to an emotional outburst over all the secrets and lies. Oscar’s sure to be in a lot of pain, so Kim’s going to have her hands full. Let’s hope Drew can step up to comfort both Kim and Oscar. They’ll need his support as the end draws near.

Can Oscar be saved or will he have to accept his fate? Do you hope Oscar gets to stick around? We’ll give you updates as other GH news comes in. Stay tuned to the ABC soap and don’t forget to check CDL often for the latest General Hospital spoilers, updates and news.