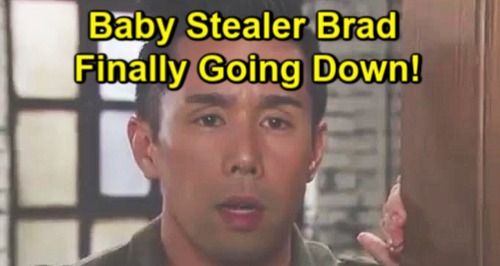 There’s no word yet on when the jig will be up, but many GH viewers are beyond ready. Brad was a mess in the chapel as he tried to bargain for “Wiley’s” safe return. However, we all knew nothing would change. Brad’s still the same lying schemer he’s been all along. He can pop antacids and serve up guilty looks as much as he wants, but it doesn’t change the damage his deception has done.

Brad seems remorseful for getting himself into his mess that night when Nelle Benson (Chloe Lanier) offered her child. Even so, Brad’s not sorry enough to come clean to Michael Corinthos (Chad Duell). Michael was devastated when he held that dead baby in his arms. He truly wanted to be a father to Jonah Corinthos, but Brad has robbed him of that opportunity.

Nelle may have handed over a perfectly healthy kid and kept her mouth shut, but she’s been at Pentonville all this time. Brad’s the one doing the heavy lifting here. He’s bent over backwards to make sure Michael stayed in the dark. Brad has also set Lucas up for some devastation of his own. Michael will certainly want his child back once the truth comes out, so Lucas’ adopted son will be ripped away.

General Hospital fans can’t forget about Willow Tait’s (Katelyn MacMullen) pain either. It’ll be tough when Willow learns the kid she’s been bonding with isn’t even hers.

Willow adores “Wiley” and is sure to be crushed when she realizes she’s not his mother at all. It would’ve been a lot easier to take the news before Willow got to know “Wiley” and saw him thrive.

Brad even pushed Julian Jerome (William deVry) to murder Liesl Obrecht (Kathleen Gati) – not to mention made an attempt on her life himself. It’s clear that Brad’s ruthless at this point. Is redemption possible when this is all over? Is there anything Brad could say or do to make up for his awful deception?