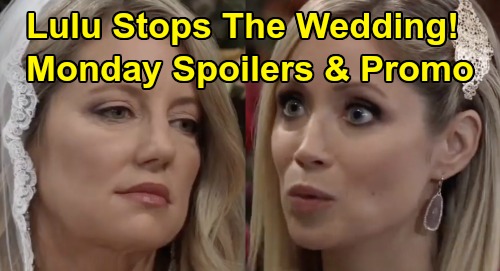 But it looks like Lulu will have difficulty finding the opportunity to pull Nina aside and lay the truth on her. She’s shown in Monday’s GH previews before the ceremony insisting that she has something to tell Nina and that it can’t wait, but it looks like she won’t get the opportunity, as Nina will have a wedding to get to. That will surely lead to some frustrating moments for Lulu, as well as confusion for Nina, who will just want to get her wedding underway.

According to ongoing General Hospital spoilers, Lulu will indeed tell Nina the truth about Sasha, but it won’t happen until the wedding ceremony is well underway. Nina will be in for a real shocker when Lulu winds up interrupting the ceremony to tell Nina the ugly truth!

Meanwhile, Josslyn Jacks (Eden McCoy) will have some disturbing news for Dev Corbin (Ashton Arbab). She’ll fill him in about spilling the beans about his true identity to Jasper “Jax” Jacks (Ingo Rademacher), which will probably strike fear in Dev. Of course, Josslyn really didn’t have choice – after all, Jax basically asked her point blank about who Dev really was. She’ll probably try to assure Dev that everything will be ok, and that the chances of him actually being sent back to Turkey are slim.

Next, Sonny Cornithos (Maurice Benard) will return home to find Jax waiting for him. Jax won’t be happy with Sonny at all, and he’ll accuse him of not changing one bit. It looks like he’ll blast his nemesis for messing with Josslyn’s well-being. Of course, he won’t like it that Sonny and Carly Corinthos (Laura Wright) expected Josslyn to lie about Dev, and he especially won’t like it that Dev’s history is basically an unknown.

Other General Hospital spoilers indicate that Sam McCall (Kelly Monaco) and Jason Morgan (Steve Burton) will put two and two together after talking to Dev and realize that Peter August (Wes Ramsey) has something to hide. Sam will note that Peter must have been working with Shiloh Archer (Coby Ryan McLaughlin), as he was on the docks with a gym bag on the night that Shiloh was trying to take off with Wiley Cooper-Jones (Theo and Erik Olson).

It looks like Jason and Sam will get Damian Spinelli (Bradford Anderson) involved soon thereafter. Of course, Spinelli doesn’t at all care for Peter and he’ll be more than happy to investigate Peter’s possible involvement with Shiloh. And it seems for now, he, Jason, and Sam will decide to keep Maxie Jones (Kirsten Storms) in the dark about their investigation and their suspicions about Peter – as least until they know more.

Finally, Carly will experience some more anxiety as she deals with her separation from Donna Cornithos (Ella and Emma Hulen). She may find that it’s more difficult to tolerate Donna being out of reach and in the NICU than she anticipated. She’s shown in Monday’s GH previews apparently waking up from a dream – perhaps a nightmare about Donna – and calling out for her little girl. It will likely take some adjustment for her to get used to not having her baby nearby.

It sounds like a lot of GH drama is heating up for Monday’s episode, so stay tuned! We’ll give you updates as GH news comes in. Stick with the ABC soap and don’t forget to check CDL often for the latest General Hospital spoilers, updates, and news.