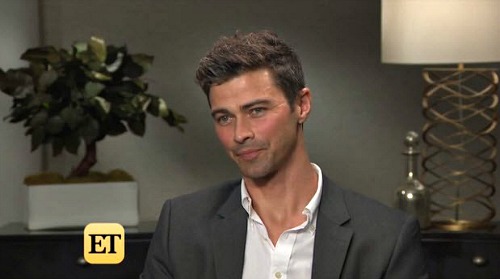 General Hospital (GH) spoilers has some news to pass on – Matt Cohen, who portrayed Griffin Munro on GH, has been hired for a new gig on Entertainment Tonight. As GH viewers will remember, Griffin left Port Charles earlier this year after having serious difficulty in coping with the murder of Kiki Jerome (Hayley Erin).

Matt has served as a guest correspondent for Entertainment Tonight in the past and has done many red-carpet and on-set interviews in that capacity. He’s interviewed celebrities such as Tom Hanks, Robin Thicke, Lucy Liu, and Keanu Reeves. But now, he’ll be taking on a full-time role with the show.

Entertainment Tonight’s Executive Producer Erin Johnson had the following to say about the show’s new hire: “Matt is full of charisma and curiosity, making him the perfect ET correspondent. We loved working with him so much as a guest correspondent this spring and summer that we had to make him a full-time member of the ET family.”

Matt also has other projects in the works as well. He’ll be directing an episode of Supernatural during the show’s final season. As you’re probably aware, Matt previously guest-starred on Supernatural as well. He’ll also be seen in the upcoming Hallmark Channel movie called Holiday Date, which will premiere on December 22, 2019.

There’s no word yet on exactly when Matt will begin his role as correspondent and co-anchor, but we’re definitely looking forward to seeing him in his new role.

Will you be tuning in to ET to watch Matt? Stay tuned to the ABC soap and don’t forget to check CDL often for the latest General Hospital spoilers, updates, and news.