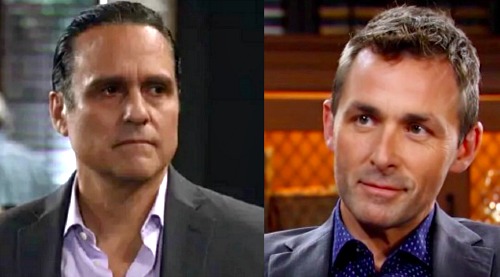 General Hospital (GH) spoilers reveal that some ABC soap stars are speaking out about mental health and trying to change the stigma surrounding it. For starters, James Patrick Stuart (Valentin Cassadine) decided to open up about his own struggles. Like many of us, Stuart has been known to get depressed sometimes. He talked about how he handles that before issuing a challenge to another GH cast member.

“I am not an expert on mental health, but I’m also not a stranger to sadness and isolation and bouts of depression,” Stuart said in an Instagram video. “I’m willing to confess to you that we are more willing to talk about physical fitness than we are mental fitness. And when I get into that place, I check in with myself…and I’ll check in with a friend, and if I have to, I’ll go talk to somebody.”

Stuart noted that he takes stock of whether he’s eating right and getting the proper amount of sleep. He monitors his screen time as well and just tries to make sure he’s doing whatever he can to keep himself on track. Stuart also feels it’s vital to “remember that feelings are not facts and they tend to change.” He wrapped up his clip by encouraging Maurice Benard (Sonny Corinthos) to chime in.

Benard rose to the challenge with an Instagram video of his own. “You don’t have to twist my arm to talk about mental illness,” Benard said. “I’ve been speaking about it for well over 25 years. It’s very important to me, and I want to say this…I’m so proud of you. You’re not just a great actor and a great performer, you’re also a great man for admitting that you have depression or anything else.”

Once Benard showed Stuart some love for being so open about his own battle, Benard offered his take on mental health issues. He had a warning for General Hospital viewers and anyone else who may not be paying enough attention. “All I want to say is people gotta start taking this illness very seriously because the bottom line is people are dying and they shouldn’t be,” Benard said.

Stuart and Benard’s posts promoting mental health awareness certainly touched plenty of fans. It’s crucial to seek help when you need it and help others who may be struggling, too. Sometimes reaching out can mean the difference between life and death.

Thank you @japastu for the challenge. I’m so proud of you for admitting and being open to speaking about your depression. . Let’s all #changedirection to end the stigma surrounding mental health. “Feelings don’t have to be facts.” #320changesdirection #makechesterproud @Talinda320