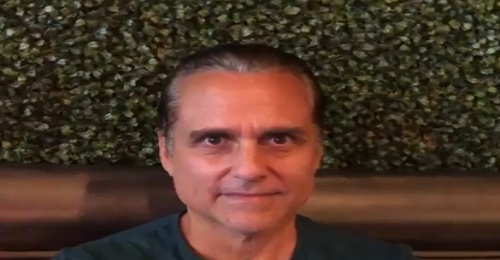 General Hospital (GH) spoilers reveal that one ABC soap star has something to celebrate. GH viewers know Maurice Benard as Sonny Corinthos in Port Charles. Sonny’s always got a lot on his plate, and Benard’s dealt with a lot in his lifetime as well. In fact, Benard had enough stories and confessions to fill a whole book! He’s releasing his memoir next year, but he recently offered fans a fun sneak peek.

On Twitter, Benard’s been gearing up for this with some exciting teasers. He just wanted to build the suspense a bit and get the hype going. When the big moment finally arrived, Benard showed off the cover of his book along with some great photos on set. You won’t want to miss these pics, which feature Steve Burton (Jason Morgan) and an adorable dog! Does it get any cuter?

Benard’s cuddling the pup in one photo while a grinning Burton holds up the book. These two are good friends in real life, so Burton was happy to support his pal. Another picture includes Ingo Rademacher (Jasper “Jax” Jacks), Eden McCoy (Josslyn Jacks), Benard, Burton and Benard’s son, Joshua Benard. You can really feel the love in this fantastic group photo. These General Hospital stars seem proud of Benard’s huge accomplishment.

Benard tweeted the pics along with a special message for his fans. “I’m so emotional and proud to be able to finally let everyone read about the story of my life ‘Nothing General About It,’” Benard said. In a separate tweet, Benard talked about his goal in writing the book and why he wanted to share his story. He also threw in some interesting hints about the secrets and shockers it contains.

“I’ve been passionate about Mental Health for the past 30 years because the most important thing to me is that this book helps people reach a positive State of Mind,” Benard said. “There is also Romance, Family and let’s not forget Buddy the Goat.” Benard also posted a link, which hooks viewers up with how to pre-order the book. Several GH watchers tweeted Benard to say they’d already secured their copies.

Nothing General About It will be released on April 7, 2020, so that’s something to look forward to! As for what’s ahead in Port Charles, General Hospital spoilers say Sonny will tackle a crisis after crisis in the coming weeks. Some crazy stuff’s brewing for the Corinthos clan, so don’t miss all the action. We’ll give you updates as other GH news comes in. Stay tuned to the ABC soap and don’t forget to check CDL often for the latest General Hospital spoilers, updates and news.

I’m so emotional and proud to be able to finally let everyone read about the story of my life in “Nothing General About It” . I’ve been passionate about Mental Health for the past 30 years because the most important thing to me is that this book helps people reach a positive State of Mind. There is also Romance, Family and let’s not forget Buddy the Goat. . Link to pre-order in my bio. https://www.harpercollins.com/9780062973375/nothing-general-about-it/