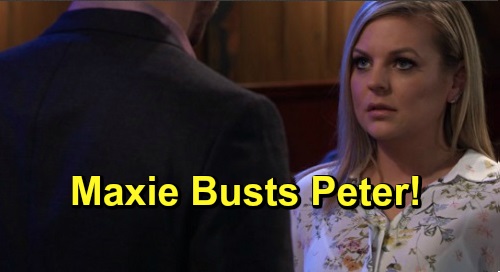 General Hospital (GH) spoilers tease that Maxie Jones (Kirsten Storms) will make a shocking discovery. She’ll soon realize Peter August (Wes Ramsey) is hiding something from her, so that could bring some dangerous suspicions. Before we get to that, let’s set the stage. Shiloh Archer (Coby Ryan McLaughlin) has escaped from the transport van that was carrying him, so Peter’s lost control of his plot.

Bryce (Brian Gross), the minion who’s posing as an armed guard, was supposed to off Shiloh and take care of Peter’s problem. Of course, Peter should’ve known better than to trust his incompetent lackey. If you want something done right, you have to do it yourself! After Andre Maddox (Anthony Montgomery) survived his stabbing, Peter should’ve realized that.

Nevertheless, Peter will only be able to do damage control following the Shiloh debacle. That’ll lead him to withdraw a hefty sum of money from his account. After Shiloh phones with his demand for cash, Peter will insist he can make it happen. He’s got plenty of money, so he won’t hesitate to give Shiloh as much as he wants. There’s no price too steep if it means keeping Maxie in the dark about Peter’s Helena Cassadine (Constance Towers) connection.

Unfortunately, Peter will run into another issue – actually, he’ll run into Maxie herself! Just after Peter secures the money for Shiloh, he’ll bump into his love. Maxie will immediately wonder where Peter’s going in such a hurry. She’ll pick up on the tense vibe and fear that something’s seriously wrong.

However, Peter will likely put on his best smile and assure Maxie that everything’s fine. He’ll lie about having an urgent business meeting he forgot about. Peter will make it clear that this meeting is a big deal, so he’ll have to dash off right away. Maxie will be left a bit bewildered by the whole experience, but she may assume Peter’s just a busy guy. He often throws himself into work, so Maxie might brush off her concerns.

Even so, General Hospital spoilers say Maxie won’t be able to avoid her fears for long. She’ll stumble across a receipt, which Peter left behind since he was in such a rush. Once Maxie sees how much Peter just withdrew from his bank account, her eyes will pop out. Maxie will be floored by the number, so she’ll naturally wonder what in the world Peter intends to do with the money. It should be easy to guess the answer is nothing good!

GH fans can probably expect Maxie to confront Peter later. Will Peter talk his way out of trouble for now? If so, he’ll just be delaying the inevitable. Maxie may battle more worries as Peter’s suspicious behavior continues.