General Hospital Spoilers: Maxie Fights Back, Game Over for Peter – Jason and Spinelli’s New Ally Is Sam’s Only Hope? 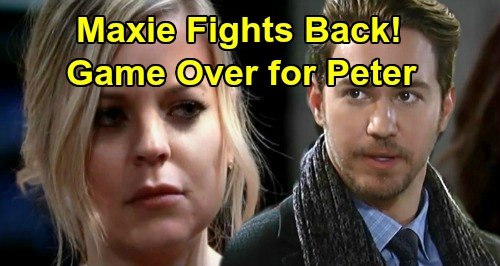 General Hospital (GH) spoilers reveal that Peter August (Wes Ramsey) is playing with fire. He’s decided to move in with Maxie Jones (Kirsten Storms), but that’ll just bring new opportunities to get caught. The closer Peter gets to Maxie, the more likely it becomes he’ll slip up.

Of course, taking this next step with Maxie is what Peter wants. That’s the whole point of his drastic efforts to avoid exposure. Peter is desperate to keep his future with Maxie intact. However, Maxie will grow concerned in the coming weeks. Living with Peter could bring another round of suspicious behavior and make her see that something isn’t quite right.

Maxie’s battled suspicions before, but Peter’s always waiting with a bogus story and a smile. He knows just how to manipulate Maxie and make her think he’s the perfect man. Unfortunately, Peter is far from perfect! Maxie will ultimately find out just how dark Peter is at his core.

This is someone who ordered Andre Maddox’s (Anthony Montgomery) stabbing and nearly finished him off at GH. Peter is also the reason Drew Cain (Billy Miller) ended up dead, and now Scout Cain’s (Ella Ramacieri) will grow up without her father. He’s not the devoted family man that Maxie thinks he can be.

Peter probably isn’t ruthless enough to harm James West, but Maxie just won’t know what he’s capable of anymore. She’s bound to be horrified that she’s bought Peter into her home and had him bonding with her son. This is a great opportunity to let Storms shine and allow Maxie to get some of her fire back. Maxie’s been oblivious to Peter’s lies and sinister side, so it should be nice to see her wise up and take charge.

There’s a chance Maxie will take a page out of Nina Reeves’ (Cynthia Watros) playbook and play Peter briefly. Damian Spinelli (Bradford Anderson) will help Jason Morgan (Steve Burton) during the week of November 18-22, so maybe it’s time to get back to the Peter mission. They really need to bring Peter down if they want to clear Sam McCall’s (Kelly Monaco) name.

Will Jason and Spinelli eventually present their suspicions to Maxie? General Hospital fans know it’s risky without enough evidence, but Maxie may be the only one who can lock in solid proof. She’s closer to Peter than anyone else in town and is the only person who’s truly earned his trust. Maxie could be a useful ally, but only if Spinelli and Jason can get her on their side.