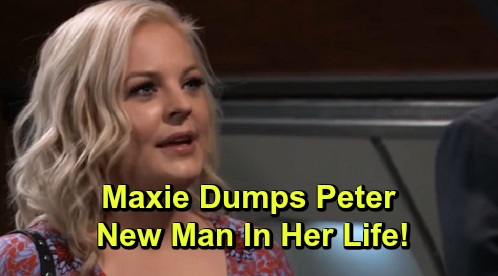 General Hospital (GH) spoilers tease that Maxie Jones (Kirsten Storms) is in for a rude awakening. She’s fallen hard for Peter August (Wes Ramsey) and trusts he’s the good man she thinks he is. There indeed seems to be part of Peter that’s kind, but it’s not enough if he’s willing to plot murders and help kidnappers. At his core, Peter’s ruthless and will do whatever it takes to get what he wants.

That’s obviously not the right guy for Maxie! She needs someone she can truly count on, especially after everything she’s been through. Losing Nathan West (Ryan Paevey) was a terrible blow, but she had Peter to pull her out of it. Unfortunately, their whole relationship will soon feel like a lie. Every moment they’ve shared has come with deception under the surface.

Peter’s love may be real, but that doesn’t change his deceit about Helena Cassadine (Constance Towers) and the memory-mapping project. It also doesn’t change Peter’s ability to order hits with ease. Drew Cain’s (Billy Miller) plane went down because of Peter, and Andre Maddox (Anthony Montgomery) nearly died from his stab wounds. Few would’ve complained if Peter’s minion had killed Shiloh, but the point is Peter orders deaths like he’s ordering takeout.

General Hospital spoilers say the walls will start closing in soon. On October 4, Peter will feel like his secrets are catching up with him. His lies may back him into a corner and ultimately leave him with no way out.

In the end, Maxie will find out all the disgusting things Peter’s been hiding from her. She’ll be appalled, especially since she was planning on him spending more time with her kids. GH fans can expect “Paxie” to crash and burn, which will eventually leave the door open for a new relationship. Peter and Maxie have some fans, but others have always felt they were a mismatch anyway. The chemistry was arguably never really there.

Maxie will get a shot at a romantic reboot – after she takes time to heal her broken heart of course. It’s never too early to start thinking about new pairing options though. Once Maxie dumps Peter, who should she fall for next? Dustin Phillips (Mark Lawson) might be an option if GH decides to do a love triangle. It might be fun to watch Maxie and Lulu Spencer (Emme Rylan) clash over Dustin.

Then again, Harrison Chase (Josh Swickard) may find himself single down the road. Chase and Willow Tait (Katelyn MacMullen) are just a bit too happy right now. General Hospital has been pulling Michael Corinthos (Chad Duell) in Willow’s direction, so Maxie could be paired with Chase if “Millow” becomes a thing.

GH could even bring in a new man for Maxie – just like they did for Lulu. Would you like to see Maxie with a brand-new beau or perhaps a Nathan recast? Nathan may have died onscreen, but any death can be undone in the soap world. It’s just a matter of crafting a semi-reasonable explanation.