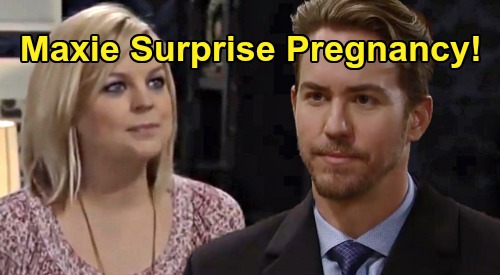 General Hospital (GH) spoilers tease that the ABC soap could be setting up a horrifying twist – horrifying for Maxie Jones (Kirsten Storms) at least and probably many fans, too. GH viewers know Peter August (Wes Ramsey) has taken a dark turn lately. It seemed like he was on the right path for a while, but now he’s in evil Heinrik Faison mode.

Peter will stop at nothing to keep his happy life with Maxie. He’s a dangerous man who has no business being around James West. Nathan West (Ryan Paevey) would be appalled if he knew what Peter was doing behind Maxie’s back! Peter made sure Andre Maddox (Anthony Montgomery) got stabbed and was behind Drew Cain’s (Billy Miller) plane crash. Now he could go after Franco Baldwin (Roger Howarth), too.

There’s no limit to this growing darkness in Peter, so this is definitely a scary situation for Maxie. Peter warned Maxie not to put him on a pedestal and seemingly feels guilty on some level. Nevertheless, guilt means nothing when you’ve destroyed lives and are destroying more to cover it up. Peter is truly selfish and wicked at his core. You’d have to be if you’re willing to resort to murder.

So why is Peter dishing out advice to Wyatt Hoover (Patrick J. Gibbons Jr.) like this is one of those old family sitcoms he claims to watch? Do General Hospital writers honestly expect us to keep believing in Peter’s redemption? Are we supposed to feel our heartstrings being pulled here?

It’s possible GH is still trying to play up this whole dichotomy in Peter, but that’s a terrible plan. Peter can dish out all the fluffy feel-good advice he wants, but it doesn’t change that he’s doing monstrous things. If General Hospital expects to salvage Peter’s redemption this way, it’s destined to fail. They surely can’t expect fans to just overlook Peter’s crimes because he’s nice to kids.

Instead, there could be a different plan in mind. GH viewers will recall that there’s been a family theme for Peter throughout his time on the show. He’s never really had one, so Maxie and James offer that.

Peter was also there for Rocco Falconeri (O’Neill Monahan) during the boy’s time of need – although he offered awful guidance if you ask us. Dante Falconeri (Dominic Zamprogna) was made out to be an abandoning mistake-maker when he’s just off trying to get help for mental issues. Still, Peter indeed helped Rocco cope the night he babysat.

Peter’s latest words of wisdom came when Wyatt was concerned about his tonsillectomy. He knew just what to say and thoroughly impressed Maxie. Could the real point of all this be a pregnancy setup? Will Maxie discover Peter’s secret horror show before she discovers she’s carrying his baby? That’d make for some juicy drama, but it’d be a real dilemma for Maxie.

If GH wants to keep Peter, they might use this baby to somehow turn Peter’s life around. Maybe there’s still hope for Peter as a father. Things look bleak now, but perhaps there’s a chance Peter can overcome his mistakes. Many viewers would probably rather just see Peter pay, but there are undoubtedly some who’d like to give him one more chance.

However, Maxie could always lose the baby eventually. It’d be nice if she wasn’t tied to Peter forever. The “Paxie” pairing is getting pretty stale anyway, so Maxie could use a new love interest. Whatever happens, you can bet that it’ll bring some chaos for Maxie!