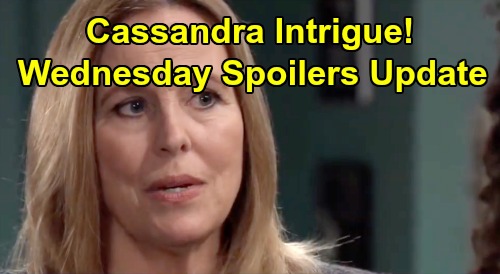 Across town, Elizabeth Baldwin (Rebecca Herbst) will face an angry Sam McCall (Kelly Monaco). Their run-in at GH will take a heated turn thanks to Drew Cain’s (Billy Miller) fate. Sam may hold out hope that there’s another explanation, but things look bleak right now. The wreckage of Drew’s plane was found and there were no signs of survivors.

Sam will argue that saving Franco Baldwin (Roger Howarth) isn’t worth Drew’s life, but it’s not like Liz has been in the driver’s seat. In fact, Liz must be feeling pretty powerless all around. General Hospital spoilers say she can fight for Franco, but the outcome is beyond her control.

As for Drew, he wanted to help Franco by tracking down Andre Maddox (Anthony Montgomery) and hopefully restoring Franco’s memories. Drew made the decision to divert his plane, but he’s not to blame either. It’s Peter August (Wes Ramsey) who caused deadly destruction. Let’s hope Peter gets what he’s got coming to him eventually!

In the meantime, Franco and Kim Nero (Tamara Braun) will get a visit from Harrison Chase (Josh Swickard). He’ll suggest there haven’t been any positive updates. Since there’s no evidence that anyone survived the crash, Kim will break down over Drew’s death. Franco will console Kim as best as he can, which should be awkward since he has Drew’s memories.

Over with Sonny Corinthos (Maurice Benard), he’ll make it clear that he’s innocent. Sonny will tell somebody that he or she’s got the wrong guy. It’s possible this will just be a jovial moment that shows us the soft and cuddly version of Sonny. However, it’s also possible Sonny will genuinely be on the hot seat. Either way, Sonny will insist he’s not at fault for the situation that’s arisen.

Elsewhere, Lulu Spencer (Emme Rylan) will lash out at Olivia Falconeri (Lisa LoCicero) for lying. After Olivia deceives Rocco Falconeri (O’Neill Monahan), Lulu will lecture her about it. She won’t appreciate having Rocco misled, so she’ll hope Olivia will cut it out and stick with honesty from now on.

Will this have something to do with Dante Falconeri (Dominic Zamprogna)? Olivia might make it seem like Dante could come home in the near future. That’s obviously not happening, so it’s easy to see why that’d rile Lulu. She wouldn’t want Rocco to get his hopes up for no reason.

Of course, it could be some other Dante lie or even something unrelated to Rocco’s dad. No matter what this is about, Lulu will make her stance clear. It sounds like some gripping General Hospital drama’s coming up. We’ll keep you posted as other GH news emerges. Stay tuned to the ABC soap and don’t forget to check CDL often for the latest General Hospital spoilers, updates and news.