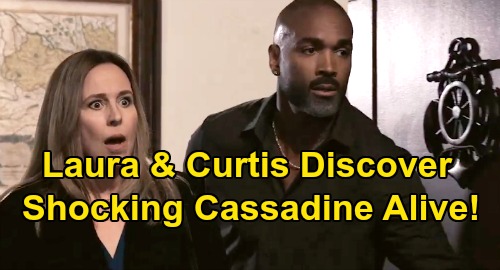 General Hospital (GH) spoilers tease that Laura Webber (Genie Francis) and Curtis Ashford (Donnell Turner) are in for a shock. On September 13, Curtis and Laura will have a top-secret meeting – most likely about the codicil to Mikkos Cassadine’s (John Colicos) will. As Spencer Cassadine’s (Nicolas Bechtel) grandmother, Laura deserves updates now and every step of the way.

Besides, Laura could prove quite helpful as this hot plot moves along. General Hospital spoilers say she’ll team up with Curtis as they approach a door and intend to search a room. They’ll have no idea that a stunning discovery is waiting behind it. GH’s weekly preview video shows Laura gasping as her jaw drops. She’ll be visibly taken aback by what she encounters in that room.

Curtis will look pretty rocked by this discovery as well. What will Laura and Curtis find that leaves them so astonished? There are some interesting options to consider here. Since this is a big Cassadine storyline, we have to consider the possibility that a presumed dead Cassadine is on the other side of that door very much alive.

Helena Cassadine (Constance Towers) might be an option since she’s been coming up a lot. Towers made an appearance in Shiloh Archer’s (Coby Ryan McLaughlin) flashback, so she’s been on set. There’s no reason why GH can’t bring Helena back from the dead, which would let Towers play the character in the present. That could bring fascinating curveballs in this story as well as Peter August’s (Wes Ramsey)!

However, there’s another option that involves an even more requested comeback. Many General Hospital viewers are eager to see Nikolas Cassadine (Tyler Christopher) on screen again. Based on all the clues the show’s offered, Nik’s return indeed seems to be in the works.

In a recent Soap Opera Digest blind item, they revealed a familiar face would likely reprise a fan-favorite role. If that’s about GH, perhaps Tyler Christopher could reappear as Nikolas. Of course, we can’t rule out a recast either. Could some form of Nikolas be on the other side of that door? It might be too early for that shocker since this storyline’s still building, but it’s worth considering.

No matter who or what Laura and Curtis find, it’ll throw them for a loop. It’ll be fun to see them face this bombshell together! We’ll keep you posted as other GH news comes in. Stay tuned to the ABC soap and don’t forget to check CDL often for the latest General Hospital spoilers, updates and news.