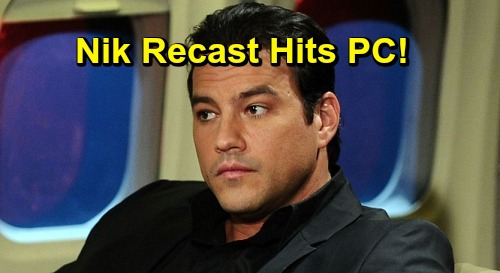 General Hospital (GH) spoilers reveal that a long-awaited return may be in the works. According to a new Soap Opera Digest blind item, a fan-fave role is being recast on one of the four main soaps. That could easily be a major GH comeback, especially since one hot storyline suggests it.

Consider what’s going on with Jasper “Jax” Jacks (Ingo Rademacher) and Hayden Barnes (Rebecca Budig). They’ve formed an unusual alliance with the goal of taking down Valentin Cassadine (James Patrick Stuart). Jax had a file on Cassandra Pierce (Jessica Tuck), so it seems likely that appear sooner or later.

Nikolas would have every reason in the world to make Valentin miserable. He’s presumed dead thanks to Valentin, but he may not be gone for good! Is Nik orchestrating this whole thing?

It’s easy to imagine Nikolas recruiting Hayden and Jax for help with his scheme. Perhaps he’ll finally reveal himself once everything blows up and Valentin suffers at last.

General Hospital spoilers say Nikolas’ comeback would be a much-needed drama jolt. Maybe all this Jax and Hayden sneakiness could set up a fall return for Nik. It’d be great to see Nikolas reunite with Laura Webber (Genie Francis) and Spencer Cassadine (Nicolas Bechtel).

The Ideal Way To Revive Cassadine Chaos And Satisfy The Fans

Ava Jerome (Maura West) could get pulled into the comeback mayhem as well. She’s already become part of the Crimson story through her cover girl moment. It feels like GH is putting all the puzzle pieces in place so we can eventually see the big picture.

Nikolas was certainly a fan favorite, so he fits this blind item perfectly. This would be the ideal way to revive some Cassadine chaos and satisfy fans down the road. Some viewers would undoubtedly prefer to see Tyler Christopher back in the role, but a recast is better than nothing!

Do you think a Nikolas recast will ultimately hit Port Charles? Would you accept a new actor in the fan-fave role? We’ll give you updates as other GH news comes in. Stay tuned to the ABC soap and don’t forget to check CDL often for the latest General Hospital spoilers, updates and news.