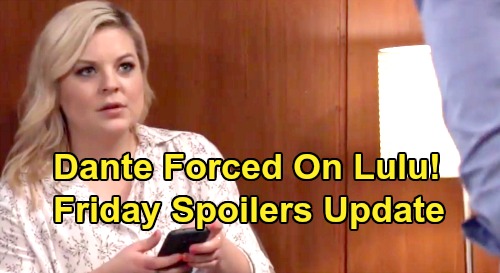 After Lucas pummels Shiloh to the floor, the cult leader will become irate. He’ll demand Lucas’ arrest and hope that’ll be added ammunition in the custody battle. Of course, those DNA results aren’t going to give Shiloh the answer he’s looking for – at least not if they’re accurate! Shiloh will ultimately have to wrap his head around the fact that he’s not the father.

Meanwhile, Willow Tait (Katelyn MacMullen) will have some updates for Michael Corinthos (Chad Duell). She’ll share the good news about Harmony Miller (Inga Cadranel) turning against Shiloh and offering her testimony. Willow will hope Shiloh lands behind bars and will be kept far, far away from “Wiley Cooper-Jones.”

Other General Hospital spoilers say Hayden Barnes (Rebecca Budig) will face an interrogation. At the PCPD, Hayden will ask if she’s under arrest. She’ll seem annoyed by Liesl Obrecht’s (Kathleen Gati) accusation and vehemently deny it. Hayden will insist she wasn’t the one who pushed Liesl into the water, but Harrison Chase (Josh Swickard) will still grill her about the details of that night.

Chase will also talk to Hamilton Finn (Michael Easton) in Thursday’s episode. It won’t take Chase long to realize his brother knows all about Hayden. Chase will wonder about their link, so Finn will admit he almost married her. Once Chase examines Hayden’s file, he’ll raise an eyebrow at some of her actions and wonder what Finn saw in the schemer.

Over with Nina Reeves (Cynthia Watros), she’ll also have questions involving Hayden. General Hospital spoilers say Nina will put Jasper “Jax” Jacks (Ingo Rademacher) on the spot. She’ll wonder what the deal is between Jax and Hayden, but she won’t get an entirely honest response.

Jax will give the same spiel Hayden gave about putting her to work on a project. He’ll praise Hayden’s skills, but he’ll probably downplay anything going on in their personal lives. Hayden planted a kiss on Jax, but it was mainly to show Finn she’d moved on.

As Nina and Jax form a stronger working relationship, Valentin Cassadine (James Patrick Stuart) will fume. He’ll determine that he needs to step up his efforts and make sure this doesn’t go any further. Valentin certainly doesn’t want Jax crossing any lines when it comes to Nina and their connection.

Next, Peter August (Wes Ramsey) will feel out of place as he heads to a WSB facility with Maxie Jones (Kirsten Storms). He’ll refer to it as “the enemy’s lair,” but Maxie will just want to concentrate on the task at hand. GH spoilers say Maxie will prepare to win Lulu Falconeri’s (Emme Rylan) husband back for her. She’ll hope to confront Dante Falconeri (Dominic Zamprogna) and convince him to come home.

Laura Webber (Genie Francis) will have a similar idea, but she’ll think Lulu needs to be the one doing the convincing. She’ll make a pitch on Thursday and try to get her daughter on board. Laura will insist that Lulu and Dante need each other. She’ll hope Lulu’s willing to go after Dante and bring him back to Port Charles, but she should have reservations about that.

Finally, Sonny Corinthos (Maurice Benard) will have an issue with Dev Cerci (Ashton Arbab). It appears the teen’s behavior will annoy Sonny, so they’ll take a moment to address it. Sonny may feel like Dev’s being a tad ungrateful since he’s gone to all this trouble for him. He’ll question what Dev had in mind when he came to Port Charles and lecture him on what he expects.

Fortunately, Dev and Sonny should be able to get on the same page again. He’s a good kid at heart, and Sonny can see real potential in him. General Hospital spoilers say there’s much more Dev drama to come this summer, so stay tuned. We’ll keep you posted as other GH news comes in. Stick with the ABC soap and don’t forget to check CDL often for the latest General Hospital spoilers, updates and news.