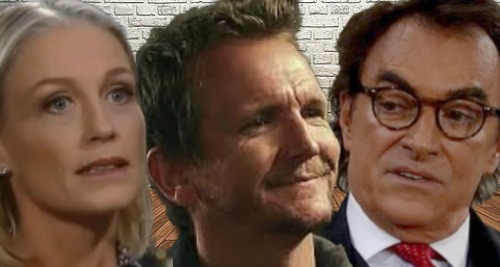 General Hospital (GH) spoilers reveal that some huge comebacks could be in the works. GH fans know one storyline has been a real airtime hog for quite a while now. Of course, we’re talking about the Dawn of Day drama and everything that connects to it. Shiloh Archer (Coby Ryan McLaughlin) has been the resident baddie for months, but perhaps that’s about to change.

Now that the situation with “Wiley Cooper-Jones” is heating up, it feels like Shiloh’s reign of terror may be winding down. There’ll undoubtedly be some explosive shockers before this plot concludes, but we could be in the homestretch. General Hospital will have to determine whether they’re going to send Shiloh to prison indefinitely, attempt to redeem him or just kill him off. Death is what most fans are rooting for!

What will GH do after that? We’re going to need some villains, which is why a new blind item may point straight in General Hospital’s direction. According to Soap Opera Digest, one soap is planning to bring back multiple baddies from the past. This info could be about any of the four daytime dramas, but it doesn’t sound like something The Bold and the Beautiful or The Young and the Restless would do.

B&B and Y&R don’t often dip into their past villain pool. It would be strange to hear about several baddie comebacks at once for those shows. Days of Our Lives might be an option since they bring back evil characters from the past pretty often. However, that would also make it less noteworthy. It wouldn’t even really be worth mentioning in a blind item since it happens all the time.

General Hospital, on the other hand, is in desperate need of some old villains to shake things up. We’re already seeing onscreen signs that it might happen. There have certainly been hints that point to Cassandra Pierce’s (Jessica Tuck) comeback. It’s reasonable to assume we might see the sneaky unknown Cassadine who picked her up, too.

We should mention that another SOD blind item suggests one show is recasting a fan-fave role, so this long-awaited Cassadine return could fit. Victor Cassadine, Stefan Cassadine and Nikolas Cassadine are all possibilities. New Nik could have a much darker edge and a Valentin Cassadine (James Patrick Stuart) vendetta to take care of!

Now that Jasper “Jax” Jacks (Ingo Rademacher) is in town, maybe a Jerry Jacks (Sebastian Roché) comeback is a possibility as well. Whatever the case, General Hospital spoilers say some fun villains could be on hand again down the road. This might be just what GH needs after someone finally puts a stop to Shiloh’s mayhem.

Would you like to see some baddies from the past again? Which comebacks are you rooting for? We’ll give you updates as other GH news comes in. Stay tuned to the ABC soap and don’t forget to check CDL often for the latest General Hospital spoilers, updates and news.