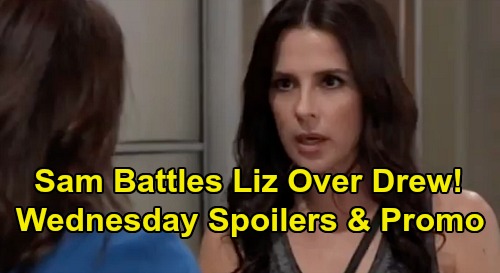 General Hospital (GH) spoilers for Wednesday, September 11, tease that Olivia Falconeri (Lisa LoCicero) will resort to fibbing. She’ll shock Lulu Spencer (Emme Rylan) by lying to Rocco Falconeri (O’Neill Monahan), so it looks like Olivia will get an earful. Perhaps Olivia will hint that Dante Falconeri (Dominic Zamprogna) could come home soon or offer some other explanation that could placate Rocco.

Regardless, Lulu won’t like the idea of misleading her son. Dante may never come home, so it’s not a good idea to fill Rocco’s head with dreams that may never come to pass. Of course, they won’t want to have a doom and gloom attitude around the kid either. It’s a tricky situation, but Lulu still won’t agree with the way Olivia’s handling this.

Other General Hospital spoilers say Harrison Chase (Josh Swickard) will deliver some updates. It appears a more extensive search has been done, but there are still no signs of survivors following Drew Cain’s (Billy Miller) plane crash. Chase will tell Kim Nero (Tamara Braun) and Franco Baldwin (Roger Howarth) the latest news, so this could give Franco a chance to comfort Kim and pull her closer.

At GH, Sam McCall (Kelly Monaco) will bump into Elizabeth Baldwin (Rebecca Herbst). Things will get heated as they disagree on the Drew drama. Sam will argue that saving Franco isn’t worth Drew’s life, but Drew made his own decision to contact Andre Maddox (Anthony Montgomery). Peter August (Wes Ramsey) is the one to blame here, but nobody will realize that just yet.

Next, Curtis Ashford (Donnell Turner) will have a chat with Jasper “Jax” Jacks (Ingo Rademacher). He’ll contend that Jax needs an expert on Helena Cassadine (Constance Towers), so we’ll see if Jax agrees. At the police station, Jordan Ashford (Briana Nicole Henry) will get a visit from Laura Webber (Genie Francis). It turns out Valentin Cassadine’s (James Patrick Stuart) deception will be their main topic.

Laura will insist Valentin isn’t giving them the whole story about what happened with Cassandra Pierce (Jessica Tuck). Jordan will likely back Laura up on that, but she may feel like prying more info out of Valentin will be tough. He’s a vault full of secrets, which leads to plenty of manipulation in his everyday life.

Finally, General Hospital spoilers say Sonny Corinthos (Maurice Benard) will point the finger elsewhere. During a conversation with someone, Sonny will note that he or she’s got the wrong guy. Based on Sonny’s expression and tone in Wednesday’s GH preview video, it’s hard to tell how serious the matter is. However, it doesn’t look like a big deal on the surface.

Regardless, Sonny is a pro at wiggling out of tight spots. If he manages to find himself in another one, Sonny will take care of business as usual! We’ll keep you posted as other GH details emerge. Stay tuned to the ABC soap and don’t forget to check CDL often for the latest General Hospital spoilers, updates and news.