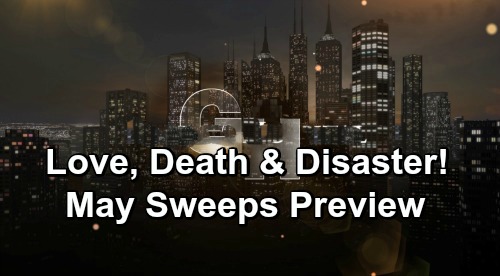 General Hospital (GH) spoilers tease that May sweeps are coming up, so several Port Charles residents will face surprises. Next month will definitely bring some powerful drama and exciting storylines. We’ve got a preview of all the hot action, so let’s take a look at what’s ahead.

First, there’s Franco Baldwin (Roger Howarth) and Elizabeth Webber (Rebecca Herbst). They’ll continue to deal with family drama, but they’ll make time for themselves as well. Liz and Franco had a jailhouse wedding, but they’ll be looking for a bigger and better way to celebrate their love soon.

Over with Ava Jerome (Maura West) and Dr. Kevin Collins (Jon Lindstrom), they’ll put their plot to trap Ryan Chamberlain (Jon Lindstrom) in motion. Unfortunately, it’ll lead to a tight spot for Ava and some trouble for Kevin. Laura Webber’s (Genie Francis) relationship with Kevin will be tested once again, but she’ll at least find a helpful ally in the search for Ryan.

Next, we should address what’s ahead for Oscar Nero (Garren Stitt). His death will leave Josslyn Jacks (Eden McCoy) reeling and in desperate need of support. Thankfully, Cameron Webber (William Lipton) will provide some along with Jasper “Jax” Jacks (Ingo Rademacher). Jax will come home to comfort Joss, but he’ll find some other exciting reasons to stick around.

Julian Jerome (William deVry) will also support Dr. Kim Nero (Tamara Braun) as she deals with her grief, but Alexis Davis’ (Nancy Lee Grahn) will remain strong. The bond between “Julexis” is unbreakable at this point, so we’ll see how they navigate that. As for Drew Cain (Billy Miller), a business proposition is on the horizon. Perhaps it’ll serve as a distraction after Oscar finally fades away.

Other General Hospital spoilers say Jordan Ashford’s (Briana Nicole Henry) health issues will get far worse. She’ll need a kidney ASAP, but finding one will prove to be a nearly impossible task. Fortunately, where there’s a will, there’s a way. GH fans can expect things to turn around for Jordan sooner or later.

Meanwhile, Sam McCall (Kelly Monaco) will move forward with a dangerous new strategy. She’ll put herself at risk along with Jason Morgan (Steve Burton), so they’ll have to watch their backs. Sonny Corinthos (Maurice Benard) and Carly Corinthos’ (Laura Wright) marriage will thrive – perhaps in part to their unborn baby. They’ll get more excited about their little one, but Carly’s worries will also grow.

General Hospital spoilers say Peter August (Wes Ramsey) and Maxie Jones (Kirsten Storms) will move slowly in their romance, but they’ll definitely feel like they’re on the right track. Lulu Falconeri (Emme Rylan), on the other hand, will find herself lonely and in need of people to lean on. Without Dante Falconeri (Dominic Zamprogna) by her side, Lulu will face some challenges.

Willow Tait (Katelyn MacMullen) and Harrison Chase (Josh Swickard) will manage to get closer, but Shiloh’s threat will hang like a dark cloud above them. As for Michael Corinthos (Chad Duell) and Sasha Gilmore (Sofia Mattsson), Valentin Cassadine (James Patrick Stuart) will become a crucial obstacle. Nina Reeves (Michelle Stafford) will be thrilled, but Valentin could have a sabotage goal in mind.

Finally, there’ll be some proposal problems for Dr. Hamilton Finn (Michael Easton). He’ll opt not to pop the question and give Robert Scorpio (Tristan Rogers) the ring, but he’ll lose control of the situation when the ring changes hands. It sounds like this could be building to some fun Nurses Ball moments.