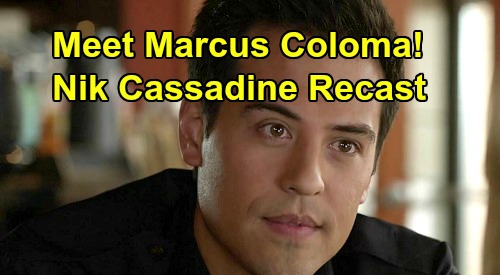 General Hospital (GH) spoilers tease that there’s a new Nikolas Cassadine in town! Ava Jerome (Maura West) just pulled a gun on the masked man in her gallery and forced him to reveal himself. She instantly recognized him as Nikolas, but this is a new face for GH viewers. The role of Nikolas is now being played by Marcus Coloma – and fans seem to have mixed feelings about it!

For starters, plenty of people were holding out hope that Tyler Christopher might make a comeback. Nick Stabile played Nikolas for a short time after Christopher left the show, but it’s Christopher who was truly popular in the part. Many General Hospital watchers were rooting for his return, but the show opted to go in another direction.

That brings us to Coloma’s debut. He’s got a certain brooding Cassadine quality about him, but his age is already a hurdle for some viewers. Christopher is 46, but he’ll be 47 next month. Coloma just turned 41, so it’s not that much of a difference. However, Coloma arguably looks younger than he is. Maybe that stubble he’s got going on will help!

Of course, GH fans haven’t even heard Coloma’s Nikolas speak yet, so it’s wise to reserve judgment here. This was a high-profile recast, which means General Hospital put a lot of thought into this. They undoubtedly saw a spark in Coloma that sealed the deal, so he deserves a chance to prove himself.

Some viewers are wondering where they’ve seen Coloma before, so let’s look at some of his previous roles. He’s been featured on shows like One Tree Hill, CSI, Lucifer, Major Crimes and more. It’ll be interesting to see how Coloma settles in at GH. Recasts always put their own spin on things, but it’s great that Nikolas is back in some form. He’s an exciting character whose return can provide some serious drama!

General Hospital spoilers say the news of Nikolas’ comeback will slowly trickle out – perhaps on a need-to-know basis. Nik won’t want to blow his plan to take down Valentin Cassadine (James Patrick Stuart), so he’ll be counting on the secret circle to come through for him.

What do you think of the new Nikolas? Do you think Marcus Coloma has the right look for the part? We’ll give you updates as other GH details emerge. Stay tuned to the ABC soap and don’t forget to check CDL often for the latest General Hospital spoilers, updates and news.