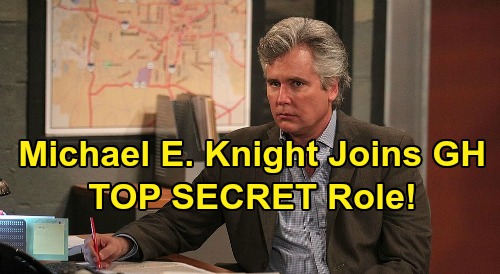 General Hospital spoilers tease that Michael E. Knight has been hired by GH and has joined the cast! Formerly known as “Tad the Cad” Martin for many years on the defunct ABC soap “All My Children” from 1982-2011 off and on, he will soon make his Port Charles debut according to Soap Opera Digest. While on “All My Children” he also played a dual role of a lookalike, Ted Orsini.

Michael E. Knight is a three-time Daytime Emmy winner, last seen on daytime as Dr. Simon Neville on “The Young and the Restless” from 2015-2016. He is good friends with James Patrick Stuart, now Valentin Cassadine and formerly also on “All My Children” as Will Cortlandt.

Stuart is enthusiastic about Michael’s coming to Port Charles, and says he loves that guy! James also states that Michael is very excited about the opportunity as well, especially since he hasn’t worked for a while, notes Stuart.

Michael has some other ties to his new soap home as well, having played on AMC many scenes with Cady McClain, who played his wife Dixie Martin. Cady, as some fans already know, is the real-life wife of Jon Lindstrom, who plays Ryan Chamberlain and Dr. Kevin Collins.

Tad and Dixie were on-again-off-again in Pine Valley nearly as many times as Sonny and Carly Corinthos (Maurice Benard, Laura Wright) have been in Port Charles! Maurice also was on AMC from 1987-1989 as Nico Kelly. He also has a former Y & R castmate in Steve Burton.

Michael’s first General Hospital airdate and character name have not yet been announced, and his hire is being described as for a top-secret role. GH fans will certainly look forward to seeing Michael again after such a long absence from their television screens, and we wish him the best of luck in his new endeavour! Keep checking CDL General Hospital spoilers frequently for all the latest news, updates and developments!