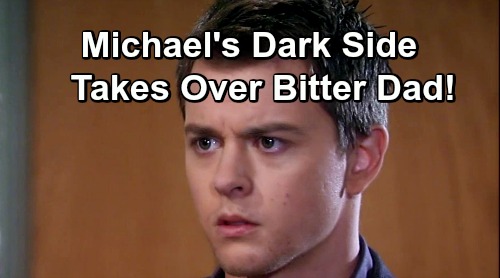 General Hospital (GH) spoilers tease that Michael Corinthos (Chad Duell) has some tough blows headed his way. He’s already faced so much pain and disappointment in his life, so we could see some crucial shifts in this character. Perhaps it’s time for Michael to show off a little of his dark side. An edgier Michael could easily result from the shockers GH has in store.

The trouble may begin with Sasha Gilmore (Sofia Mattsson). Although Sasha is a far better person than Nelle Benson (Chloe Lanier), she’s still a lying con artist. Michael believes Sasha is a charming gal who finally found her mother, Nina Reeves (Michelle Stafford). He’s in for a rude awakening when he realizes Sasha teamed up with Valentin Cassadine (James Patrick Stuart) to dupe her fake mom.

In the past, Michael might’ve understood the complexity of the situation. He might’ve had sympathy for Sasha since she got caught up something that snowballed. However, that was before Michael got burned more than once by sweet-on-the-surface Nelle. We all know how that turned out!

Michael was sleeping with a manipulative murderer, so he hopefully learned a little something about trust. It’s possible Michael will forgive Sasha eventually, but it’d make sense for him to turn against her thanks to his battle scars. That could be step one on Michael’s journey to the dark side.

Of course, Michael could also show an edgier version of himself if Shiloh Archer (Coby Ryan McLaughlin) tightens his grip on Willow Tait (Katelyn MacMullen). He could become determined to protect his godson as well since Brad Cooper (Parry Shen) is sinking deeper and deeper into DoD.

Since Kristina Corinthos-Davis (Lexi Ainsworth) just now broke free, Michael may end up fed up with Shiloh and his manipulation. He’ll be sick of Shiloh closing in on people he cares about. General Hospital spoilers say these could be other important steps as we work toward a Michael who’s hardened and less optimistic.

That brings us to the biggest game-changer of all for Michael. He was devastated by the loss of his son, Jonah Corinthos. Michael had to bury his boy and still suffers to this day. He can’t help but think about what it would’ve been like to raise Jonah. How’s Michael going to feel when he realizes Nelle tricked him once again and Brad played right along? Michael will be absolutely LIVID.

Look at how much time Brad and Nelle have robbed Michael of. He’s missed so much of Jonah’s early development. Not only did he deal with unnecessary grief, Michael can never get that time back. He’ll be relieved to know his son is alive, but we can obviously still expect plenty of rage.

If you throw in the mourning Josslyn Jacks (Eden McCoy) is dealing with and the potential miscarriage Carly Corinthos’ (Laura Wright) may face, no one would be surprised to see Michael become broken and bitter. How much can one man and his family take?

Chad Duell is an excellent actor, but his talents are often wasted. He can do far more than the fluffy feel good scenes. Let’s hope General Hospital will let a darker Michael take control in the months ahead. Duell deserves the chance to bring it!