General Hospital Spoilers: Sonny Wants Shiloh Dead and Buried – Deal with Margaux Could Be His Only Hope of Survival 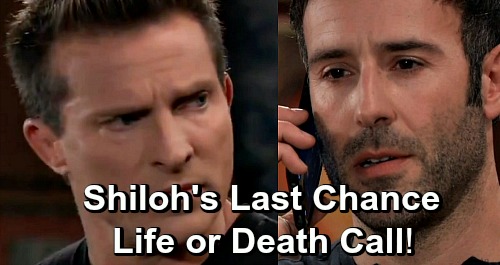 General Hospital (GH) spoilers tease that Sonny Corinthos (Maurice Benard) will have to take charge of a situation. Things will head downhill for Sam McCall (Kelly Monaco) during the week of May 13-17. She wants to go through with Shiloh Archer’s (Coby Ryan McLaughlin) initiation and record everything as evidence, but Jason Morgan (Steve Burton) will obviously be very much against that idea.

You can bet Sonny will back Jason up on this. Sam may ultimately relent – at least to their faces. However, Sam can be awfully stubborn and that could be the case this time as well. Regardless, General Hospital spoilers say Sam will move forward with the riskiest phase of her plan. Whether she modifies her plot or not, Sam will be putting a lot on the line to take down Shiloh.

Unfortunately, Sam’s scheme will be derailed. Shiloh will find himself distracted during their time together, and that can’t be good news! Shiloh is all about being present and clearing one’s mind. If Shiloh’s distracted, it could mean he’s suspicious of Sam’s game. Will he realize Sam’s been conning him from the get-go?

Soon after, Sam will feel completely helpless. It sounds like she’ll be at Shiloh’s mercy, but desperate Jason will undoubtedly fight to get to her. Nevertheless, there are two issues here. Jason can rescue Sam from immediate danger, but that doesn’t take care of Shiloh. What’s to stop Shiloh from going after Sam or even their kids? This is obviously a ruthless man.

Perhaps that’s where Sonny will come in. He’ll still be concerned about Kristina Corinthos-Davis’ (Lexi Ainsworth) pledge as well as Sam’s safety. GH spoilers state that Sonny will seek a deal that could help. It’s possible Sonny will want to reach some sort of an agreement with Shiloh, but that would probably be an act. It’s tough to imagine Sonny compromising with Shiloh at all.

Margaux Dawson (Elizabeth Hendrickson), on the other hand, might be a good option. General Hospital spoilers say Margaux will have a heated confrontation with Sonny. Will he spell out his DoD concerns and why they have to stop Shiloh? Could Margaux have dirt could lead to Shiloh’s destruction? Of course, Sonny may be able to offer some form of proof by then – even if it’s fake.

Whatever the case, Sonny will have to hope Margaux’s Dawn of Day loyalty can be broken. Then again, a small part of Sonny may want this deal to fail. Despite the problems it might bring, we all know Sonny wants Shiloh dead as a doornail!