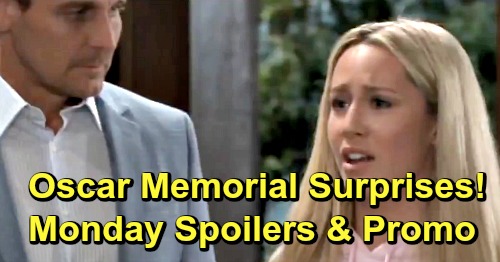 General Hospital (GH) spoilers for Monday, May 13, tease that Cameron Webber (William Lipton) will lash out at Franco Baldwin (Roger Howarth). He’ll be doing his community service when Franco approaches to talk about something. Franco might have some nice gesture planned as part of Oscar Nero’s (Garren Stitt) memorial service.

Of course, the loss is still fresh for Cam, so he won’t appreciate whatever Franco has in mind. He’ll contend that Franco is just doing this to impress his mom and brothers, but Franco will shut down that idea. If this indeed involves Oscar, Franco may insist he’s actually doing it for Drew Cain (Billy Miller) and a good kid who didn’t deserve his fate.

Meanwhile, Drew and Dr. Kim Nero (Tamara Braun) will try to figure out what to do. They won’t know how to say their final goodbyes, but Ned Quartermaine (Wally Kurth) will have the answer. He’ll point out that their son was way ahead of them because Oscar had a plan. He worked out all the details with Ned and Olivia Quartermaine (Lisa LoCicero), so Kim and Drew just have to honor Oscar’s wishes.

Unfortunately, that’ll be tough when they’re still in mourning. Oscar wanted them to focus on celebrating his life, not grieving the loss. Josslyn Jacks (Eden McCoy) will definitely struggle in Monday’s GH episode. She just won’t be sure she’s ready for this, but she’ll get plenty of support from Carly Corinthos (Laura Wright), Jasper “Jax” Jacks (Ingo Rademacher) and Sonny Corinthos (Maurice Benard).

Speaking of Sonny, he’ll clash with Ned over something. Perhaps Ned’s attempt to follow Oscar’s instructions won’t go over well with Josslyn’s stepdad. Sonny loves Joss and wants to protect her heart from further damage. However, Ned may convince Sonny that Oscar knew what he was doing. Working through this should be helpful to Josslyn in the end.

Other General Hospital spoilers say Sam McCall (Kelly Monaco) will be taken aback. As Michael Corinthos (Chad Duell) stands next to her, she’ll ask if Jason Morgan (Steve Burton) knew about this. Since Monday will mostly be about Oscar’s memorial, perhaps they’ll be talking about the video message he left behind. Word has it that’ll be played after Oscar’s instructions are carried out.

At Charlie’s Pub, Alexis Davis (Nancy Lee Grahn) will offer Julian Jerome (William deVry) her gratitude. She’ll note that Julian didn’t have to do something, but she’ll be glad that he did. This may involve Julian giving Kristina Corinthos-Davis (Lexi Ainsworth) her job back. Settling into an old routine – one that doesn’t involve DoD – should be good for Kristina right now.