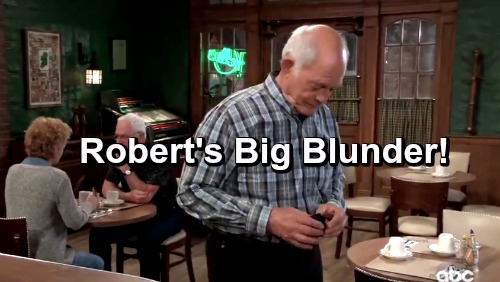 General Hospital (GH) spoilers tease that Robert Scorpio (Tristan Rogers) will get himself into quite the predicament. As GH viewers know, Robert is in possession of the very unique engagement ring that Hamilton Finn (Michael Easton) plans to give to Anna Devane (Finola Hughes).

Finn was showing it to him at Kelly’s when Anna suddenly appeared and Robert had to pocket the ring to keep Anna from seeing it. He’s had it in his possession ever since, much to Finn’s chagrin.

Of course, Finn has been slowly working up his courage to pop the big question to Anna, so he’s not exactly in a hurry to get the ring back, but he would like to get it out of Robert’s hands sometime in the near future. Robert doesn’t have any malicious intent in keeping the ring; he just hasn’t had the occasion to give it back yet.

Well, as it turns out, General Hospital spoilers indicate that Robert is going to have a big mishap with the ring. Exactly how it all goes down remains to be seen, but Robert will misplace the ring somewhere, and Mike Corbin (Max Gail) will come into possession of it. Of course, Mike’s quite forgetful as he has Alzheimer’s Disease, so once he pockets the ring, he may just forget all about it.

According to General Hospital spoilers, Robert won’t want to actually admit to Finn that he lost the ring, so he’ll go on a mission to replace it, hopefully without Finn ever knowing. But that could be quite a feat to pull off, since Finn is quite meticulous and would probably be able to tell if Robert gives him back a ring that isn’t 100% spot on for the original ring.

Robert will enlist Mac Scorpio’s (John J. York) help, and the two brothers will work together to try to find the ring, then to get a replacement, so that Finn won’t be any the wiser. But it might be difficult for Robert to keep putting Finn off, as Finn’s going to insist that Robert give back the ring – after all, Finn will want to actually propose at some point!

It should be interesting to watch all the antics as Robert realizes that he’s lost the ring, then bumbles around with Mac to cover his blunder, rather than just admit to Finn that he lost Anna’s engagement ring. Look for Robert and Mac to use their professional skills to try to track down the ring, then search for a suitable replacement.

GH spoilers indicate that there will be a proposal by somebody at the upcoming Nurses’ Ball, so perhaps the whole thing will get resolved by then. According to GH spoilers, the real ring will ultimately get back into the right hands, but it will take quite the journey to get there!

Are you looking forward to Finn getting his ring back and proposing to Anna? Stay tuned to the ABC soap and don’t forget to check CDL often for the latest General Hospital spoilers, updates, and news.