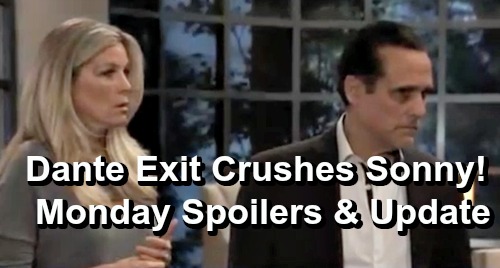 General Hospital (GH) spoilers for Monday, April 1, tease that Nora Buchanan (Hillary B. Smith) will return to put her legal skills to good use. This attorney who was featured on One Life to Live will pop up to represent Dr. Kevin Collins (Jon Lindstrom) in court. Nora really knows her stuff, so Kevin will be in the best possible hands for his arraignment.

Lucy Coe (Lynn Herring) will also show her support for Kevin. She’ll let him know that she’s not turning her back on him, so Kevin should appreciate her kind words. Franco Baldwin (Roger Howarth), on the other hand, won’t be sympathetic at all. He’ll think Kevin brought this on himself and should go down for his part in Ryan Chamberlain’s (Jon Lindstrom) destruction.

When Elizabeth Webber (Rebecca Herbst) chooses to go easy on the doc, Franco will be appalled. He’ll wonder how Liz can possibly defend Kevin when his actions led to Kiki Jerome’s (Hayley Erin) murder. However, Liz may remind Franco that Kevin didn’t actually do the deed. He certainly bears some responsibility in this, but let’s not pretend Kevin left a bloody Kiki dead like Ryan did.

Still, the trust will remain shattered between Laura Webber (Genie Francis) and Kevin. General Hospital spoilers say Laura will open up to Alexis Davis (Nancy Lee Grahn) on Monday. Laura just won’t know how to rebuild that trust, but Alexis may not have the answer. This is something Kevin and Laura will just have to work through with time and patience.

Over with Maxie Jones (Kirsten Storms), she’ll have a big announcement to make. Maxie and Peter August (Wes Ramsey) just got the DNA test results back, but they don’t seem to be what they were expecting. Nina Reeves (Michelle Stafford) just learned that they ran a test of their own, so she may be curious about what the results revealed.

GH spoilers say Maxie will likely deliver an apology. It looks like the results were once again altered, so Maxie may be sorry she doubted Valentin Cassadine’s (James Patrick Stuart) story. After that’s cleared up, Nina will want a few more answers. She’ll try to figure out why Maxie would even run this test, so Maxie might share how her suspicions developed and reassure Nina that she’s got the real deal.

Afterward, Sasha Gilmore (Sofia Mattsson) will be a mess over the close call. She’ll want Valentin to tell her what that was about, but he’ll probably just reiterate that she should keep her mouth shut. Valentin may hope that this will be the end of their snags, but you can bet a few more are looming!

Other General Hospital spoilers say Lulu Falconeri (Emme Rylan) will have to break some bad news. Dante Falconeri (Dominic Zamprogna) was forced to bid Lulu farewell on Friday, March 29, so she’ll have to explain the situation to the rest of Dante’s loved ones. It won’t be easy since Dante couldn’t really even explain it himself.

Nevertheless, Lulu will do her best to help Rocco Falconeri (O’Neill Monahan) understand. The poor kid will obviously be upset about his dad taking off again. Rocco will point out that Lulu said everything was going to be OK, but she may insist that’s still true. They’ll just have to find a way to adjust to life without Dante.

Unfortunately, that goes for Sonny Corinthos (Maurice Benard) as well. He’ll get updates on Dante’s departure along with Carly Corinthos (Laura Wright), so they’ll try comfort Lulu in Monday’s heartbreaking episode. We’ll keep you posted as other GH details emerge. Stay tuned to the ABC soap and don’t forget to check CDL often for the latest General Hospital spoilers, updates and news.