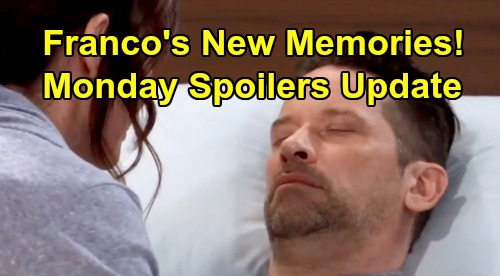 General Hospital (GH) spoilers update for Monday, August 12, tease that Sonny Corinthos (Maurice Benard) will prepare for a bittersweet day. He’s happy that Mike Corbin’s (Max Gail) found some happiness through Yvonne Godfrey (Janet Hubert), but his father’s still slipping away. Mike can’t understand that Yvonne’s already married – or at least he wouldn’t remember any marriage explanation they gave him.

Mike and Yvonne are set to tie the knot, but it’ll just be for their own benefit. This obviously won’t be legal, but keeping them content is what’s important. If Yvonne and Mike can have a little bliss at the memory care facility, they deserve that. Of course, the charade of it all will remind Sonny of how far gone his dad is. He’ll rely on Carly Corinthos (Laura Wright), who’ll assure him that he can do this. Carly will be on hand to provide plenty of support.

Stella Henry (Vernee Watson) will also get some important news, which could involve this wedding. Someone will lean on her this Monday, and it’ll probably be Marcus Godfrey (Nigel Gibbs). Mike and Yvonne’s fake nuptials will be a very real reminder of the wife Marcus lost.

Elsewhere, Cameron Webber (William Lipton) will catch Josslyn Jacks (Eden McCoy) off guard. She’ll wonder why he disappeared after his community service, so Cam will snap about getting kidnapped. Josslyn will cry out in shock and push for more information. She’ll hear all about Shiloh Archer’s (Coby Ryan McLaughlin) evil plan and how hero Franco Baldwin (Roger Howarth) paid the price.

Speaking of Franco, he’ll remain comatose at GH with Elizabeth Baldwin (Rebecca Herbst) by his side. Liz will insist Franco has to wake up and come back to her. She’ll beg Franco not to bail on their beautiful family. Liz will be desperate to keep their love story going strong, but this next chapter will be a rocky one.

Other General Hospital spoilers say Alexis Davis (Nancy Lee Grahn) will visit Kevin Collins (Jon Lindstrom) for guidance. She’ll vent about getting “fired” by Neil Byrne (Joe Flanigan) once again and wonder what’s going on in his head. Alexis wouldn’t mind testing the waters of a romance, but Neil seems adamant that it can’t happen. She’ll try to read between the lines with some crucial help from Kevin.

At Charlie’s Pub, Kristina Corinthos-Davis (Lexi Ainsworth) will be surprised to learn Julian Jerome’s (William deVry) selling the place. She’ll grill him about it and wonder if Julian’s told Alexis about his big move. Julian will admit he hasn’t had the chance, but the opportunity will arise as soon as Alexis walks in.

General Hospital spoilers say Alexis will ask if she should brace herself. Julian will reply that it depends on where she stands on the issue. He’ll reveal that he’s selling Charlie’s Pub and moving to Manhattan with Kim Nero (Tamara Braun). Alexis will certainly have a few questions for Julian, but she’ll try to ignore any pain she feels. She’ll choose to concentrate on Julian and Kim’s new beginning instead.

Over with Kim, she’ll speak to Lucy Coe (Lynn Herring) about selling her home. Lucy will explain the process and suggest she can help Kim figure out an asking price. Kim will find it all remarkably easy. She’ll start looking forward to this clean slate with Julian, but will they actually go? It seems Julian will back out eventually and stay close to his family instead.

Kim could also have a reason to stay in PC thanks to Franco’s new memories – well, they’ll be new to him anyway! Franco will remember Drew Cain’s (Billy Miller) life when he wakes up and that includes his love for Kim. General Hospital spoilers say things could get pretty complicated in the coming weeks.

It sounds like some fantastic scenes are ahead. We’ll give you updates as other GH details emerge. Stick with the ABC soap and don’t forget to check CDL often for the latest General Hospital spoilers, updates and news.