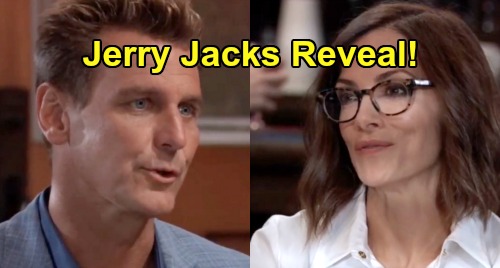 General Hospital (GH) spoilers preview for Monday, August 26, tease that Nina Reeves (Cynthia Watros) will be a hot topic for Hayden Barnes (Rebecca Budig) and Jasper “Jax” Jacks (Ingo Rademacher). They’re planning to take down Valentin Cassadine (James Patrick Stuart), which will certainly affect his fiancée. As a result, Hayden will push Jax to share his stance on Nina before she offers her own.

Jax will talk about how the pragmatic part of him wants Nina to be happy for business reasons. He’ll suggest that it’s good for Crimson if Nina’s content. The personal part of him will admit he likes Nina, but he’ll be quick to clarify it’s not “like that.” Jax won’t want Hayden thinking he’s interested in Nina romantically, although it’s up for debate whether he actually is or not. There’s definitely a spark going on.

Regardless, Jax will admit part of him is sad for Nina, too. He’ll understand how it can be difficult to love someone like Valentin. When Hayden realizes Jax speaks from experience, he’ll open up about his dangerous brother. Jax will point out that Jerry Jacks (Sebastian Roche) was always lethal to everyone except him. He’ll feel like his brother could never understand why he refused to stand by and watch him wreak havoc.

Jax will suspect that Nina and Valentin’s relationship is quite similar. He’ll suggest that things are complicated since Valentin is so amoral and yet worships the ground Nina walks on. It leads Nina to believe she knows Valentin, but Jax just won’t think that’s true. He’ll believe Valentin is always going to find a way to disappoint Nina.

Hayden will note that if everything goes according to plan, Valentin’s going to lose. That means Nina’s going to lose, too. Jax will feel bad about that, but Hayden won’t feel sorry for Nina. She’ll go off on a Nina rant that’s highly entertaining, so General Hospital fans won’t want to miss it! Hayden will call Nina a “spoiled little rich girl” and suggest nobody’s had an easy life. She won’t think Nina gets a pass for her pain.

Hayden will feel like Nina’s money makes people quick to forgive and forget. She clearly won’t have any sympathy for Nina based on GH’s latest preview video. It shows Hayden saying, “Oh, poor Nina! She’s mentally unstable. Poor Nina! Her mother put her in a coma. Boo-hoo.” She’ll be surprised that Jax has bought into all the excuses, but he’ll just see Nina in a different light than she does.