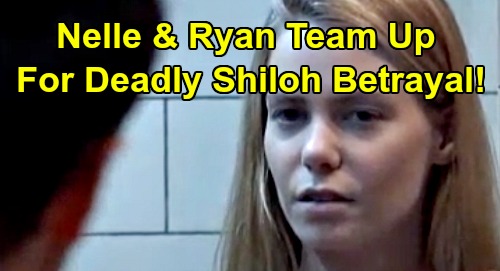 General Hospital (GH) spoilers tease that Shiloh Archer (Coby Ryan McLaughlin) may have met his worst nightmare. He’s used to preying on weak women he can manipulate, but weak isn’t even in Nelle Benson’s (Chloe Lanier) vocabulary! She’s just as conniving as Shiloh – if not more. Nelle’s not some obedient “Dawnie” that Shiloh can push around, but perhaps she can use him to her advantage.

During Nelle and Shiloh’s recent conversation, Nelle wasn’t afraid to speak her mind. She ranted about the baby Shiloh tried to steal, but the cult leader insisted his child had been illegally adopted. Shiloh vowed to get that baby back, but Nelle didn’t seem concerned. She viewed Shiloh’s long list of charges as an insurmountable obstacle, but he’s got total confidence he can get past his latest hurdle.

Their chat took an interesting turn when Shiloh brought up his ELQ shares. Nelle was immediately intrigued and pointed out that the Quartermaines owed her, too. She suggested their chat was “to be continued,” so we’ve got some unlikely GH allies – at least for a while.

Of course, Nelle can only let this alliance go so far. She knows Shiloh wants to get his hands on “Wiley Cooper-Jones,” so what will she do? Nelle will keep this partnership going as long as it benefits her. In the end though, she’ll likely try to take Shiloh’s money and leave him with nothing. Knowing Nelle as well as we do, we don’t doubt her ability to make it happen.

Nelle may even end up with big plans to steal “Wiley” aka Jonah Corinthos herself. Since Peter August (Wes Ramsey) has agreed to help Shiloh, General Hospital spoilers say a sneaky strategy will soon be in play soon. Nelle will want in on that, so she may tout her talents to Shiloh.

However, Nelle could betray Shiloh eventually and make sure he lands right back behind bars. She could even start whispering in Ryan Chamberlain’s (Jon Lindstrom) ear about this menacing wannabe. Nelle knows how to push buttons, so she could make Ryan think Shiloh is a villainous poser who thinks he’s a genius. She might provoke some rage in Ryan and convince him to snuff Shiloh out!

Regardless, Nelle seems like the smarter General Hospital villain out of the two. She’ll still have to watch her back when it comes to this guy, but we’d say Shiloh is the one who should really be worried! We’ll give you updates as other GH news comes in. Stay tuned to the ABC soap and don’t forget to check CDL often for the latest General Hospital spoilers, updates and news.