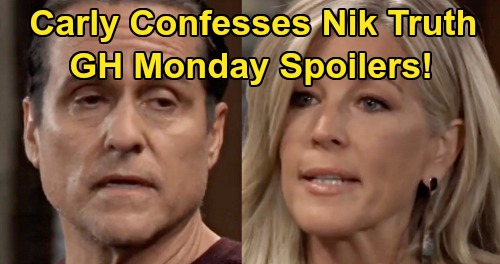 General Hospital (GH) spoilers for Monday, December 30, tease that Sonny Corinthos (Maurice Benard) and Carly Corinthos (Laura Wright) will have a heated argument. Naturally, they’ll be bickering about Carly’s big secret with Jasper “Jax” Jacks (Ingo Rademacher). After Carly returns from visiting Jax to discuss all the Nikolas Cassadine (Marcus Coloma) drama, Sonny will wonder where she was. Carly will immediately get defensive and ask if this is another interrogation.

Of course, Sonny will be pretty fed up, so he’ll suggest that he doesn’t know…unless Carly wants to confess! A frustrated Carly will fire back, “Yeah, I wanna confess that I’m sick of my husband treating me like I’m the enemy!” Sonny will counter that he wouldn’t treat Carly like that if she’d just tell him the truth. Their shouting match will rev up until Carly insists it’s time to tell Sonny exactly what’s going on.

Will Carly actually come clean about Nik’s survival? General Hospital spoilers say Sonny will feel a deep sense of betrayal on Tuesday, December 31, so Carly’s confession could be the Monday cliffhanger. She might fill Sonny in as we build toward Nikolas’ big reveal in Port Charles.

Regardless, it’s clear that Sonny and Carly have some issues to sort out in their marriage. Jason Morgan (Steve Burton) will be concerned about them in Monday’s episode. Whether Jason gets brought in the Nikolas loop or not, he’ll worry about how Sonny’s going to handle things with Jax. Jason will likely offer Sonny a warning since Josslyn Jacks’ (Eden McCoy) happiness is at stake. Sonny really shouldn’t risk doing anything that might turn his stepdaughter against him.

Other GH spoilers say Jax will wind up at Wyndemere. It sounds like Jax may once again spar with Valentin Cassadine (James Patrick Stuart), so this will be a tense episode all around! Over with Curtis Ashford (Donnell Turner) and Laura Webber (Genie Francis), they’ll have a meeting of their own – although it’ll surely be a calmer one. Laura and Curtis might talk about Curtis’ mission to find Claudette Beaulieu (Bree Williamson), who could play a crucial role in the looming custody battle.

Lulu Spencer (Emme Rylan) needs some leverage as she prepares for this fierce fight, so Curtis may promise that he’s going to provide it. General Hospital buzz points to a potential paternity change for Charlotte Cassadine (Scarlett Fernandez), so that could cause chaos down the road! We’ll give you updates as other GH news comes in. Stay tuned to the ABC soap and don’t forget to check CDL often for the latest General Hospital spoilers, updates and news.