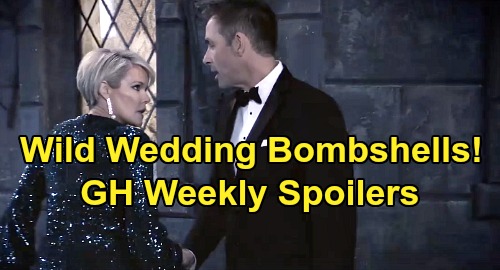 General Hospital (GH) spoilers for the week of December 30 to January 3 tease that some shockers are coming up in Port Charles. First, Carly Corinthos (Laura Wright) will be resolute. She’s been insisting that if Jasper “Jax” Jacks’ (Ingo Rademacher) situation isn’t resolved by New Year’s Eve, she’s going to come clean. It seems Carly will stick to that plan no matter what.

GH fans can expect betrayal to hit Sonny hard. He’ll likely learn that Carly’s been keeping Nikolas Cassadine’s (Marcus Coloma) survival under wraps, so that’ll bring fury and pain. Sonny won’t appreciate Carly leaving him out of the loop on something so massive.

Meanwhile, Laura Webber (Genie Francis) will try to convince Charlotte Cassadine (Scarlett Fernandez) of something – presumably that this “secret bodyguard” of hers doesn’t exist. Laura may point out that Nikolas passed away and can’t be the man Charlotte saw. Nevertheless, Charlotte will be adamant that she’s interacted with this bodyguard, who looks just like the man on Lulu Spencer’s (Emme Rylan) phone.

Over with Sasha Gilmore (Sofia Mattsson), she’ll defend Valentin Cassadine (James Patrick Stuart) in a confrontation. It sounds like Valentin may come under fire for orchestrating the fake daughter scheme, which Sasha claimed she did on her own. Will Nina Reeves (Cynthia Watros) dump Valentin at the altar as planned? Will some other twists derail their ceremony? This is sure to be a wild wedding, so stay tuned!

Later, Maxie Jones (Kirsten Storms) will be asked for a favor. Nina will turn to Maxie for help with something, so it’ll be interesting to see what it is. Perhaps Maxie will have to hold down the fort at Crimson while Nina deals with a crisis.

Back with Valentin, he’ll battle confusion. Will this tie in with the suspected Charlotte paternity bombshell? That’s one possibility to consider. This could also tie in with Nikolas’ exposure if he indeed makes himself known. Whatever the case, Valentin will be puzzled as he tries to sort through the facts of a situation.

Other General Hospital spoilers say Ned Quartermaine (Wally Kurth) will find fatherhood tough. He may have trouble knowing how to handle things with Brook Lynn Ashton (Amanda Setton). Brook Lynn can be pretty stubborn, so it’s no wonder Ned will face some dad difficulties!

Across town, Jason Morgan (Steve Burton) will accept what he can’t change. His fate won’t be something that pleases him, but Diane Miller (Carolyn Hennesy) will confirm some bad news. Jason and Sam McCall (Kelly Monaco) may deal with another obstacle, but never fear! “JaSam’s” luck will turn around soon after the new year begins. There’ll be more curveballs around the corner, but it’s good to know some happiness will be thrown in.

Finally, Peter August (Wes Ramsey) will be surprised – and not in a positive way! He may realize he’s got another fire to put out if he wants to preserve his bliss with Maxie. General Hospital spoilers say some exciting scenes are coming up. We’ll give you updates as other GH details emerge. Stick with the ABC soap and don’t forget to check CDL often for the latest General Hospital spoilers, updates and news.