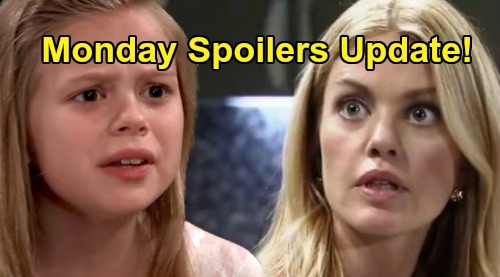 General Hospital (GH) spoilers update for Monday, December 30, teases that Carly Corinthos (Laura Wright) will meet up with Jasper “Jax” Jacks (Ingo Rademacher). GH fans know Carly agreed to keep the truth about Nikolas Cassadine (Marcus Coloma) under wraps, but it’s getting tougher and tougher. Sonny Corinthos (Maurice Benard) was hurt by Carly’s deception and is quite concerned about her getting in over her head.

When Carly returns home after their strategy session, she’ll get grilled about where she was. Sonny will suspect he already knows – and he won’t like all this sneaking around with Jax. Carly will get what Sonny’s implying and will lash out over the interrogation. She’ll feel like her own husband is treating her like the enemy, but Sonny will suggest there’s an easy fix.

General Hospital spoilers say Sonny will want the truth, and Carly will ultimately decide he’s right. She’ll announce that it’s time for Sonny to know exactly what’s going on. They’ll make their way into the kitchen, where Carly will give Sonny a warning.

She’ll insist that when Sonny hears this secret, he’ll want to do something about it. Carly will beg Sonny not to react and make things worse.

Sonny will once again push Carly to come clean, so she’ll admit Nikolas is alive and well. Carly will add that she spoke to Nik at Jax’s house just after Halloween. She’ll explain that she wanted to confront Jax about why he wouldn’t let Josslyn Jacks (Eden McCoy) stay with him. Carly will point out that after Nik walked in, the reason for Jax’s reluctance became clear.

Sonny will ask what Nikolas had to say for himself, so Carly will explain that Nik’s been waiting for the opportunity to strike. He wants to take back the Cassadine estate and recruited Jax for his mission. Sonny will note that last time he checked, Nikolas was a fugitive. Since Jax has been helping Nik, Sonny will insist that’s a crime.

Of course, this is exactly what Carly was afraid of. She doesn’t want Sonny retaliating and getting Jax deported as a result. It would devastate Josslyn and tear their family apart, so Carly will plead with Sonny on Monday. She’ll want him to just sit tight and let this play out, but that’ll be difficult for a guy like Sonny.

As for Carly and Sonny’s marriage, it should take a hit over this Nik shocker. General Hospital spoilers say Sonny will battle a sense of betrayal after Carly’s confession. Jason Morgan (Steve Burton) will do his best to help “CarSon” navigate the crisis.

Like Carly, Jason will probably agree that Sonny can’t make trouble for Jax. He’ll fret about what might happen if Sonny lets his temper take control.

Across town, Curtis Ashford (Donnell Turner) and Laura Webber (Genie Francis) will have a crucial discussion. They’ll sit down to talk about what’s next, so Curtis may mention the hunt for Claudette Beaulieu (Bree Williamson). Since Valentin Cassadine (James Patrick Stuart) and Lulu Spencer (Emme Rylan) haven’t been able to resolve their conflict, Lulu’s going to need dirt she can use in court.

Claudette could offer that dirt, but she has to be found first! Curtis may fill Laura in on how his search is going and provide some hope.

Back with Jax, he’ll head to Wyndemere for an important task. Jax may trade barbs with Valentin while he’s there, but he’ll mainly want to speak with Nina Reeves (Cynthia Watros). General Hospital spoilers say Jax will warn Nina to ditch her vengeful non-wedding. He’ll think Nina should take the high road and focus on finding her own new path.

Nina will have a huge decision to make later this week – and it’ll become even more complicated after Nikolas chaos erupts! We’ll give you updates as other GH news comes in. Stick with the ABC soap and don’t forget to check CDL often for the latest General Hospital spoilers, updates and news.