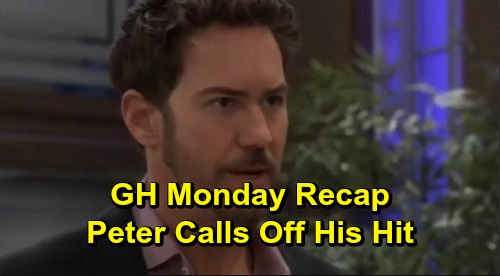 General Hospital (GH) spoilers recap for Monday, December 9, reveal that Peter August (Wes Ramsey) instructed a henchman on the phone to stop Franco Baldwin’s (Roger Howarth) memory procedure…even if he had to kill Franco or Andre Maddox (Anthony Washington). He then noticed Anna Devane (Finola Hughes) standing nearby and lied, claiming that he had been on the phone with a work associate. Anna didn’t totally buy it, and the two sat down for a drink and conversation.

As they talked, their conversation steered to how Peter still doubted himself, even though this was a happy time for him, as he was moving in with Maxie Jones (Kirsten Storms). Anna gave him a pep talk and noted that he could create his own destiny and that he was a good man. And with that, Peter abruptly excused himself and attempted to phone the henchman again to call off the memory procedure, to no avail. Anna then caught Peter again and demanded to know what was going on.

Meanwhile, “Drew Cain” aka Franco prepared for the memory procedure to begin at GH. He spoke briefly with Elizabeth Baldwin (Rebecca Herbst), Cameron Webber (William Lipton), and Scott Baldwin (Kin Shriner) and seemed resigned to have the procedure done. Throughout all these conversations, Peter’s armed henchman watched and lurked around the corridors, waiting for the right moment to strike.

Eventually, Andre took Franco to the procedure room, with Elizabeth telling him that she’d never forget him, and “Drew” telling her to be happy. Peter’s henchman followed Andre and Franco, throwing his burner phone in the garbage as he trailed them…which was at the precise moment that Peter was trying to call him to call off the hit. But the henchman didn’t get the call and kept pursuing Andre and Franco.

Andre then had Franco sign a “do not resuscitate” form and sedated him, while the henchman, now in hospital scrubs, peered in the room. Out in the waiting area, Elizabeth, Cameron, and Scott held hands together and made a conscious effort to believe that Franco would be back soon.

Next, Nina Reeves (Cynthia Watros) spoke with Valentin Cassadine (James Patrick Stuart) at The Metro Court. Valentin updated Nina on his break-in at Ava Jerome’s (Maura West) gallery and the mystery man in the mask who was also there. Nina didn’t let on that she knew that the mystery man was Nikolas Cassadine (Marcus Coloma), nor that she was in possession of Nikolas’ insignia ring.

Across town, Ava showed up at her gallery and explained to Trina Robinson (Sydney Mikayla) that she had checked herself out of Shadybrook and was back to work. Trina updated her on the recent break-in at the gallery, and Ava gave some hints that the portrait was hidden somewhere in the gallery – perhaps behind another painting.

Ava then got a visit from Griffin Munro (Matt Cohen), and the two had a civil conversation, although they did touch on the fact that Griffin still believes that Ava is her own biggest enemy. Ava noted sadly that Kiki Jerome (Hayley Erin) would probably beg to differ on that. Ava learned about Lucas Jones’ (Ryan Carnes) condition from Griffin, and she reeled, saying that she hoped her brother wouldn’t experience the loss of a child, as it’s an unbearable pain.

Ultimately, Griffin left as Nina arrived at the gallery. Nina informed Ava that there were actually two break-ins to the gallery last night, and that both Valentin and Nikolas had come looking for the portrait. Nina then showed Ava Nikolas’ ring and reminded Ava that ghosts don’t wear rings and that Nikolas had one of the only rings of that sort in existence.

Ava appeared a little skeptical, and Nina turned up the pressure on her, saying that it’s time for the two of them to do something, and that the ring proves that Nikolas Is alive. Nina stressed that they should join forces and take down the Cassadine boys once and for all.

Finally, an exasperated Jasper “Jax” Jacks (Ingo Rademacher) opened his front door to find Nikolas, whose key didn’t work. Turns out, Jax had his locks changed and told Nikolas that his bags were packed and that he wanted him gone. Nikolas protested and argued that Spencer Cassadine (Nicolas Bechtel) was relying on them, but Jax said he’d had enough, and that Nikolas had played the Spencer card enough.

Nikolas then admitted that he wasn’t able to get the portrait, which Jax absolutely couldn’t believe, and they argued about that and about Hayden Barnes (Rebecca Budig), whom Jax tried to call but couldn’t reach. Soon, Nikolas realized that his insignia ring was missing, and he freaked out about that until there was a knock on the door – it was Valentin, who yelled through the door for Jax, saying that they needed to put all their cards on the table.