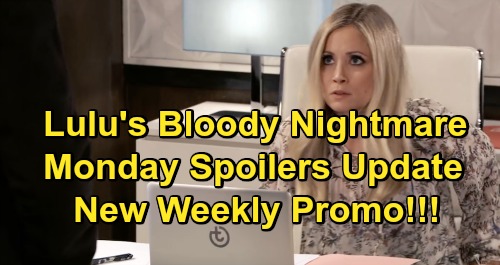 General Hospital (GH) spoilers update for Monday, January 21, tease that Anna Devane (Finola Hughes) will have questions about the virus that caused her to go blind. Thankfully, her doctors were able to repair the damage with laser surgery. Of course, that doesn’t put Anna any closer to sorting this case out. She’s determined to get answers and Dr. Hamilton Finn (Michael Easton) intends to help.

Finn and Anna will mull over when Anna contracted this virus as well as who’s behind it. Anna will wonder why she suddenly went blind now. She’ll feel like there must be some strategy in play, but she won’t be sure what it is. Fortunately, Robert Scorpio (Tristan Rogers) will pitch in on all this later this week. His skills and connections will be helpful as this storyline heats up.

Since we know Willow’s been struggling with a different kind of loss, that may be what she comes clean about. Willow might talk about giving Wiley up for adoption along with her reasons why. Regardless, Chase will appreciate the fact that Willow is letting her guard down. Their bond will strengthen, which is certainly Chase’s goal right now.

At the catacombs, Josslyn Jacks (Eden McCoy) will think there must be an entrance around there somewhere. Oscar Nero (Garren Stitt) may suggest they should just give up and go home, but Joss won’t want him to miss out. Checking off the items in Oscar’s planner is all they have right now. It’s a simple task that’s really helping them cope and prepare for Oscar’s inevitable fate.

Unfortunately, Oscar will soon fear his fate’s going to be pushed up. He’ll be knocking on death’s door along with Josslyn when this catacombs adventure goes wrong. They’ll be saved later this week, but Dr. Kim Nero (Tamara Braun) will be in panic mode for now. She’ll tell Elizabeth Webber (Rebecca Herbst) that Oscar’s late getting in touch with her. Kim may fear Oscar’s tumor has already taken him out.

Liz will reassure Kim as Sonny Corinthos (Maurice Benard) deals with an irritated Carly Corinthos (Laura Wright). She’ll feel like someone should get what he has coming to him. Maybe the topic of the murderer will come up. Kiki Jerome’s (Hayley Erin) death could be on their minds after visiting Morgan Corinthos’ (Bryan Craig) grave. GH fans know how riled Carly can get when it comes to loved ones she’s lost.

Other General Hospital spoilers say Lulu Falconeri (Emme Rylan) will slowly realize she’s in trouble. She knows too much and she’s about to pay the price for it. “Dr. Kevin Collins” aka Ryan Chamberlain (Jon Lindstrom) will step forward with his knife, so Lulu will wonder what he’s doing. It’ll slowly dawn on her that “Kevin” is a dangerous maniac.