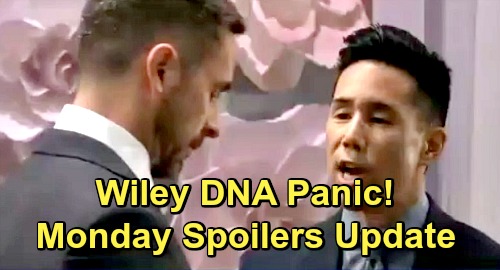 General Hospital (GH) spoilers update for Monday, July 8, tease that Franco Baldwin (Roger Howarth) and Elizabeth Baldwin (Rebecca Herbst) will have their long-awaited wedding reception. They’ll hop on The Haunted Star with their guests for a night no one will ever forget. “Friz” fans will get lots of lovey-dovey fun, but GH viewers can certainly expect plenty of chaos, too.

Liesl Obrecht (Kathleen Gati) will cause a stir thanks to her drunkenness. She’ll tell Felix DuBois (Marc Anthony Samuel) this marriage isn’t built to last, but it appears she’ll actually be talking about Valentin Cassadine (James Patrick Stuart) and Nina Reeves’ (Cynthia Watros) looming nuptials. Liesl will divulge a bit too much to Franco later, so she may spill something about Sasha Gilmore (Sofia Mattsson).

Nearby, Kevin Collins (Jon Lindstrom) will reluctantly join Laura Webber (Genie Francis) for this big bash. He’ll admit he’s not really ready to reenter the social scene after all the Ryan Chamberlain (Jon Lindstrom) drama, so Laura will offer reassurance. She’ll point out that no one’s paying attention to them anyway, and Kevin will think he knows why.

Since Brad and Julian know Shiloh isn’t really the “baby daddy,” they’ll worry about the inevitable DNA test. However, Julian may suggest they’ll just take this one step at a time. He’ll vow to do whatever it takes to keep Brad, Wiley and Lucas Jones (Ryan Carnes) together.

Bobbie will also corner Julian again and suggest that he’s never truly of any help. She’ll feel like Julian only makes situations worse, so she won’t know why he bothers. Over with Kim Nero (Tamara Braun), she’ll think it’s nice to be celebrating for a change. Kim will be delighted for Franco and Liz, so her grief may die down for few brief moments.

Other General Hospital spoilers say Ava Jerome (Maura West) will meet with a psychic. She’ll hope this woman can help her reach out to Kiki Jerome (Hayley Erin) and exchange messages. Veronica Cartwright will debut as this creepy medium, and she’ll have some shockers to share with all the “Friz” partygoers.

Curtis Ashford (Donnell Turner) will slip away from the crowd to make a phone call. He’ll note that Jasper “Jax” Jacks (Ingo Rademacher) has a file on Valentin and most likely mention the one on Cassandra Pierce (Jessica Tuck) as well. Valentin will appreciate Curtis’ efforts, but he’ll definitely want him to stay on top of things. He can’t let his guard down when it comes to sneaky Jax.

Back with Liesl, she’ll take a dip in the harbor before the evening winds down. Hayden Barnes (Rebecca Budig) will also leave Liz and Hamilton Finn (Michael Easton) floored when she waltzes in. This wedding reception will continue on Tuesday’s new GH episode, July 9, so some of the surprises will spill over into the next show.