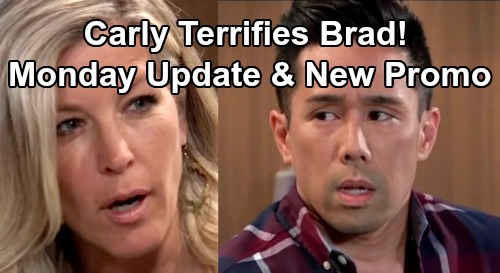 General Hospital (GH) spoilers update for Monday, June 24, tease that Nina Reeves (Cynthia Watros) will give Willow Tait (Katelyn MacMullen) a hard time as usual. Willow is running late for her hearing at the courthouse, so she’ll be eager to leave the classroom and get over there ASAP. Unfortunately, Lulu Falconeri (Emme Rylan) along with Franco Baldwin (Roger Howarth) and Elizabeth Webber (Rebecca Herbst) have other ideas.

Willow’s surprise, which seems to be the news that their petition paid off, hasn’t arrived yet. Nina will scoff at Willow for having somewhere better to be, but this is an urgent situation! Willow really should’ve called for a sub instead of risking missing the hearing, but there’s nothing she can do now. As the principal enters and Diane calls her phone, Willow will have a difficult choice to make.

Willow would love to keep her job, but “Wiley Cooper-Jones” needs to be the priority here. She’s getting on the judge’s bad side, which could bring catastrophic results. The last thing Willow wants is to be forced to divulge “Wiley’s” name. At the same time, Willow won’t want to blow her chance to stay at this elementary school and keep doing what she loves.

Diane will think the choice is clear, so she’ll keep trying to get in touch. She’ll even call someone else to share that Willow’s running late. Time is running out, so Diane will definitely be in a tizzy. Meanwhile, Josslyn Jacks (Eden McCoy) will hang out with her dad and face an uncomfortable run-in. She’ll be with Jasper “Jax” Jacks (Ingo Rademacher) when she spots one of her least favorite women.

It seems it’ll be Ava Jerome (Maura West) who riles Joss up. General Hospital spoilers suggest Ava may have a Crimson meeting since she’s their newest cover girl. You can bet Josslyn will object just like Carly Corinthos (Laura Wright) did! Next, Maxie Jones (Kirsten Storms) will be bursting with excitement. She’ll find out something that certainly makes her day brighter.

Whether that involves Dante Falconeri (Dominic Zamprogna) or something less significant, Maxie will be over the moon. Over with Jason Morgan (Steve Burton), he’ll talk to Michael Corinthos (Chad Duell) about what’s ahead. Michael will have updates on Douglas Miller, who’s Willow’s father and the man Shiloh Archer (Coby Ryan McLaughlin) murdered.

Shiloh rarely does anything without a little help from his brainwashed followers, so Michael and Jason will plan a trip to Beechers Corners. They’ll hope poke around and score evidence that could lock Shiloh up permanently. Across town, Jordan Ashford (Briana Nicole Henry) will irritate Curtis Ashford (Donnell Turner). It appears Jordan will overdo it and get reprimanded for not focusing on her recovery.

At GH, Brad Cooper (Parry Shen) will be monitored after a minor health crisis. He might have an anxiety attack or something along those lines. Brad’s a mess over everything happening with “Wiley”, but Carly will insist on adding to the chaos. She’ll learn Bobbie Spencer (Jacklyn Zeman) hasn’t been informed about Shiloh’s threat, so she’ll push for a confession right away.

Lucas Jones (Ryan Carnes) will be the one to open up to Bobbie soon enough. Back with Franco, he’ll tell Liz he doesn’t think something’s even going to happen. If Willow bails on the principal and leaves him annoyed, Franco may think their attempt to help her has been a bust.

Then again, this could involve wedding party preparations or have something to do with Kim Nero (Tamara Braun). Those are also topics that have been on Franco and Liz’s mind lately. Regardless, General Hospital spoilers say some fantastic drama’s brewing.

It sounds like some excellent scenes are coming up. We’ll keep you posted as other GH details emerge. Stay tuned to the ABC soap and don’t forget to check CDL often for the latest General Hospital spoilers, updates and news.