General Hospital Spoilers: Mysterious Comeback Blows Up Liz and Franco’s Wedding Reception – See Who Derails the Big Event and Why 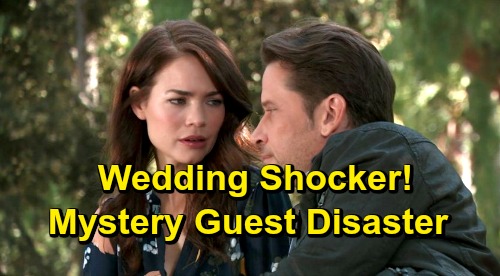 General Hospital (GH) spoilers tease that a mysterious comeback is in the works. During the week of July 1-5, one former Port Charles resident will be ready to hit town once again. This female character will make preparations for a grand reentrance. It’s sure to be a memorable one for several other characters in PC!

Since Franco Baldwin (Roger Howarth) and Elizabeth Webber (Rebecca Herbst) had a jailhouse wedding, they never got to properly celebrate. They’re planning a fun reception to celebrate with their family and friends on July 8. Since this comeback is brewing just before the big event, we’d say this lovely lady will make her debut there.

Of course, there’s an easy explanation for who this is. Although General Hospital isn’t confirming it just yet, we know Hayden Barnes (Rebecca Budig) is set to return soon. We also know Franco and Liz can’t seem to have any wedding-related celebration without some drama to shake it up. It seems likely that Liz’s sister will show up with a kid in tow.

Hamilton Finn (Michael Easton) could be on hand for this celebration, which would maximize the impact of Hayden’s reintroduction. General Hospital fans know Finn’s still in the dark on his own child. Hayden let Finn believe that she had a miscarriage, so he moved on with his life and is quite happy with Anna Devane (Finola Hughes).

However, Anna will remain out of town a bit longer and that’ll leave Finn to sort through a complicated situation on his own. GH fans should see a mixture of shock, anger as well as concern. General Hospital spoilers state that Finn will work on curing someone’s mystery illness this summer.

We’d say that’s a pretty good reason for Hayden to reenter the picture. Perhaps she fears for their kid’s life and desperately needs Finn’s help. Whatever the case, it sounds like the “Friz” gathering is going to explode. Liz and Franco just need to throw in the towel when it comes to trying to have successful parties!

Are you looking forward to Hayden’s return? Will Finn find love with his former flame again? Can he cure their sick child if that’s where this storyline’s headed? We’ll give you updates as other GH news comes in. Stay tuned to the ABC soap and don’t forget to check CDL often for the latest General Hospital spoilers, updates and news.