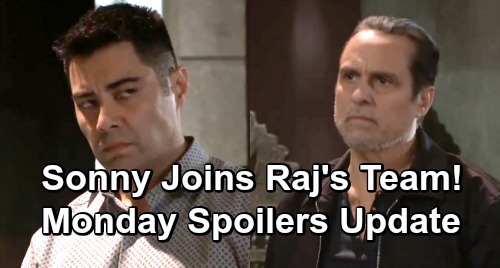 General Hospital (GH) spoilers update for Monday, March 18, tease that Curtis Ashford (Donnell Turner) will seem a bit distracted. When Jordan Ashford (Briana Nicole Henry) realizes her hubby needs to share, she’ll urge Curtis to say what’s on his mind. Jordan will think it’s important to get everything out in the open. Maybe Curtis will express concern over Jordan’s health and how far she intends to push herself.

Jordan can be a workaholic, but Curtis doesn’t want her diving back in at the PCPD so soon. She needs a kidney transplant, so that has to be the priority right now. While Curtis and Jordan have a crucial discussion, Peter August (Wes Ramsey) and Sasha Gilmore (Sofia Mattsson) will do the same. Sasha will track Peter down so they can talk about Nina Reeves’ (Michelle Stafford) upcoming nuptials.

Valentin Cassadine (James Patrick Stuart) convinced Sasha to be Nina’s fake daughter, but now she’s torn. Sasha has grown to love Nina, so she doesn’t want to break her heart. At the same time, Sasha hates lying to her pretend mom. It’s a big mess, but Sasha won’t reveal any of that to Peter. Instead, she’ll focus on the wedding and perhaps a strategy to halt it.

However, Peter may encourage Sasha to back off and let Nina be happy. He’s not a huge fan of Valentin either, but he knows the sneaky Cassadine would do anything for his love. Sasha will try to let that be enough, but her growing guilt and fears will take a toll in the coming weeks.

Other General Hospital spoilers say Mike Corbin (Max Gail) will spend some time with his family. Michael Corinthos (Chad Duell) and Carly Corinthos (Laura Wright) will take Mike out to eat, but their barbeque dinner won’t exactly be fun. Mike’s mind has continued to slip away offscreen, so he’ll be confused about where he is and what’s happening. He’ll end up shouting that he needs to leave now.

While Carly and Michael help Mike relax, Lulu Falconeri (Emme Rylan) will fret about the danger Dante Falconeri (Dominic Zamprogna) is in. She’ll just wish Dante were home where he belongs. Maxie Jones (Kirsten Storms) will listen to Lulu’s worries and offer reassurance on Monday. She’ll think Lulu should have faith that Dante will come back to her.

General Hospital spoilers say Dante will attempt another tactic. He’ll tout the benefits of keeping Sonny alive and letting him join their team. Raj will ultimately allow it, so Sonny will live to tell the tale. The next step will be trying to get back to PC, but they’ll have to be smart about it.

At GH, Dr. Hamilton Finn (Michael Easton) will be baffled when he learns Anna Devane (Finola Hughes) was admitted and is currently blind. That’s when Anna will come around the corner and explain the twin confusion. She’ll introduce Finn to her sister, Alex Devane Marick (Finola Hughes), who has the same virus that Anna did and needs his help.

Finn will suggest he’ll only assist Alex with Anna’s approval. That’ll give Anna some leverage, but she’ll want something in return. Anna will demand to know which of her memories are the implanted ones. She’ll seek the truth, so Alex will tell a story about a derailed mission that’s always troubled Anna. General Hospital spoilers say Alex was actually the person behind that mistake.

Next, Alex will drop a hint about another false memory. It looks like it’ll involve Anna’s recollection of conceiving and giving birth to Peter, but she won’t know for sure just yet. The confirmation bomb will have to come later! We’ll give you updates as other GH news comes in. Stick with the ABC soap and don’t forget to check CDL often for the latest General Hospital spoilers, updates and news.