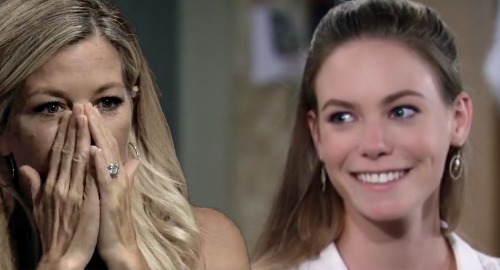 General Hospital (GH) spoilers tease that Carly Corinthos (Laura Wright) will soon be reunited with Sonny Corinthos (Maurice Benard). She’ll be worried when he drops off the grid for a bit, but Sonny always makes it home. It won’t be long until they’re back in each other’s arms and focusing on their impending bundle of joy.

Carly told Jason Morgan (Steve Burton) and Josslyn Jacks (Eden McCoy) about her unexpected pregnancy. She’ll go public with a baby announcement eventually, so that’s when the stakes will be raised. Everyone will know all about Carly’s upcoming addition. It’ll leave Carly even more excited when she’s hearing all these words of congratulations and well wishes.

Carly’s baby survived that crazy ordeal Ryan Chamberlain (Jon Lindstrom) put her through. However, there’s no way GH will just let the rest of this pregnancy go smoothly. It’s still early, so there’ll be plenty of time for Carly’s world to come crumbling down.

We have to consider the possibility that Carly will lose this baby. Since Michael Corinthos’ (Chad Duell) son is actually alive, what’s the point in having another kid in the Corinthos family? There doesn’t seem like much of one.

You could argue that General Hospital wants to give Sonny another child since Morgan Corinthos (Bryan Craig) is dead and Dante Falconeri (Dominic Zamprogna) will leave again somehow. Nevertheless, it’d probably just be better to go for the drama of a miscarriage. If that’s how GH intends to take this story, how will Carly lose this baby? Could a fierce enemy be behind it?

Chloe Lanier likes popping up for Nelle Benson’s (Chloe Lanier) return stints. She’s made it clear that as long as she can fit it in her schedule, she’s always eager to come back to GH. Could Nelle somehow be responsible Carly’s baby woes? Nelle’s had a lot of time to sit and think behind bars. You can bet she blames Carly for her suffering – including the fact that she had to give up her child.

Once Michael finds out Jonah Corinthos is alive, it’ll lead to major conflict with Brad Cooper (Parry Shen) and even Lucas Jones (Ryan Carnes). The family chaos could be enough to stress Carly to the max and cause a miscarriage. That’d leave Nelle at fault in a roundabout way.

Of course, General Hospital spoilers say they could take a more direct approach. Since Nelle is in prison, it seems inevitable that she’ll escape one of these days. Perhaps Nelle will target Carly for revenge. Nelle wouldn’t mind making Carly lose her baby since she was forced to separate from her own.

Regardless, Nelle will fit back in the GH action sooner or later. We’ll give you updates as other news comes in. Stay tuned to the ABC soap and don’t forget to check CDL often for the latest General Hospital spoilers, updates and news.