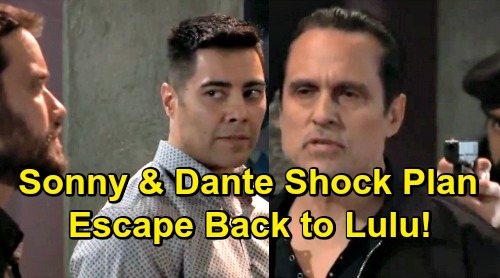 General Hospital (GH) spoilers tease that Dante Falconeri (Dominic Zamprogna) will have to make a split-second decision. Raj Patel (Noshir Dalal) appears to have total faith in Dante. He wasn’t concerned about Sonny Corinthos’ (Maurice Benard) arrival at all since Dante is seemingly so loyal.

Of course, Raj still expects Dante to prove it! That’s why he insisted Sonny had to die and pushed Dante to pull the trigger himself. If you want to prove your loyalty to someone, murdering your father is a surefire way to do that. However, Dante wants Sonny to survive, which means he’ll need another solution.

Dante will fire the gun, but he won’t do it with the intention of killing his dad. General Hospital spoilers say Dante will convince Raj that Sonny could help them. He’ll think Sonny’s skills and connections could come in quite handy. Despite Raj’s initial doubts, he’ll work through them and grant Dante’s request.

Afterward, Dante will manage to score a moment alone with Sonny. He’ll get updates on Lulu Falconeri’s (Emme Rylan) stabbing, which almost proved deadly. Dante will obviously be emotionally affected by that. He’ll realize he needs to go home and be with his wife, but Raj will remain a hurdle.

Dante will have Sonny there to help, but his dad will also be a serious complication. You can bet Raj will be keeping a closer eye on Dante now. He’ll have to make sure Dante is as loyal as he claims to be. Dante will need to watch out for Sonny’s safety as well. By showing up out of the blue, Sonny’s taken a mess and made it messier.

Nevertheless, Dante will have the motivation he needs thanks to the news about Lulu. He’ll rely on Sonny to get him back to his family before something else goes wrong. This father-son duo will start working on a new plot. General Hospital spoilers say they’ll come up with a plan to make their escape, but the stakes will be high and the consequences could be deadly!

It sounds like some excellent scenes are in the works. We’ll keep you posted as other GH details emerge. Stay tuned to the ABC soap and don’t forget to check CDL often for the latest General Hospital spoilers, updates and news.