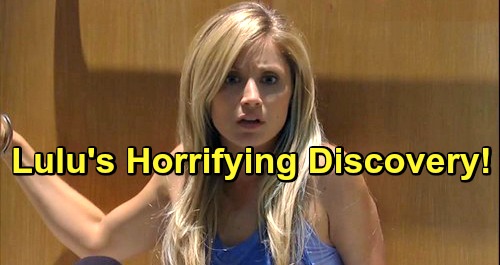 General Hospital (GH) spoilers tease that Lulu Falconeri (Emme Rylan) will be filled with gratitude. She’ll thank someone on March 22, so could that be about Dante Falconeri (Dominic Zamprogna)? Unfortunately, Zamprogna only signed on for a 10-episode arc, so GH may work through his storyline pretty quickly. It’s possible Lulu will receive word that Dante’s been found and will soon return home.

Of course, a dangerous showdown’s coming up first. Dante will shoot Sonny Corinthos (Maurice Benard) during this faceoff, but it looks like he’ll just be trying to protect them both. It’d be better for Sonny to get a flesh wound from his son than face the enemy’s shot to the heart. GH fans will definitely get some exciting scenes out of it.

On March 26, General Hospital spoilers say Sonny will mull over a dilemma with Alexis Davis (Nancy Lee Grahn). That’ll probably be about Kristina Corinthos-Davis (Lexi Ainsworth), so Sonny will surely be back in Port Charles by then. It’s tough to imagine him accomplishing much of anything by phone in Turkey. Sonny also wouldn’t just leave alone after finding Dante, so they should both be back in PC.

However, that doesn’t mean the drama will be over. General Hospital spoilers say there’s so much more to come in this hot plot. GH will really pack a lot into Dante’s short stint. On March 26, Dante will face a stunning situation. He’ll be taken aback by something, so that doesn’t sound good. Later, Lulu will make a horrifying discovery. Will Dante be in grave danger?

Perhaps they’ll enjoy a warm reunion before this moment as the calm before the storm. Then, General Hospital can launch the next round of chaos. After all, there’ll have to be something that takes Dante off canvas again. Will he be followed from Turkey? Will Lulu discover her injured husband after the enemy fights back?

There are plenty of bombshells that could leave Lulu alarmed, but this one will likely involve Dante. Lulu may worry she’s going to lose her hubby just as fast as she got him back! Could Dante’s next exit bring a lengthy coma or even death? Will he simply have to leave town permanently to protect his family?

General Hospital viewers won’t want to miss the “Lante” shockers ahead. We’ll give you updates as other GH news comes in. Stay tuned to the ABC soap and don’t forget to check CDL often for the latest General Hospital spoilers, updates and news.