General Hospital Spoilers: Dante Shoots Sonny – Desperate Undercover Gamble To Save Them Both 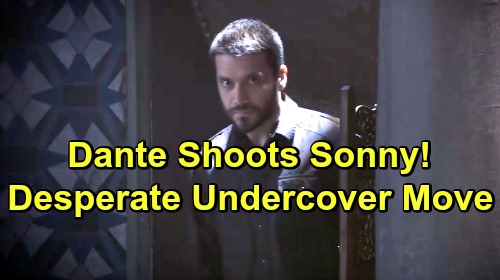 General Hospital (GH) spoilers tease that Sonny Corinthos’ (Maurice Benard) heroic mission will turn into a total disaster. He feels like Dante Falconeri (Dominic Zamprogna) needs his help, which may be true in a way. However, Dante isn’t a helpless hostage somewhere like Sonny expects. It looks like he’s still very much undercover, which means Sonny’s arrival will put the whole plan in jeopardy.

GH’s latest promo shows a gun-toting Sonny. He points the trigger at the man in front of him and insists the person around the corner should show himself or his boss dies. That’s when Dante saunters in looking awfully menacing. Of course, he’ll likely have to put on a show to prevent blowing his cover.

Sonny will quickly realize what’s up and do his best to play along. General Hospital spoilers say Sonny will be willing to die if that’s what it takes. He would gladly trade his own life for Dante’s if necessary. Unfortunately, Sonny’s decision to show up out of the blue will indeed cost him. In an effort to keep them both alive, word has it Dante will have to pump a bullet in his father!

It sounds like this shocking shooting will change everything in Turkey. There’s a good chance Dante’s desperate strategy won’t work. Some General Hospital casting sides surfaced a while back that pointed to a captive in a Turkish prison. Perhaps Dante will find himself locked up after Sonny makes his escape.

Naturally, Robert Scorpio (Tristan Rogers) could step back in the story to save the day. Since Sonny has separated from Robert, it makes sense that Robert will swoop in later and help. The good news is all three of them will should make it out of this alive. The bad news is things will get worse before they get better.

For now, it seems Sonny and Dante will play a very dangerous game. Sonny’s life will be on the line if this shooting plays out as expected. Maybe this is General Hospital’s way of paying Sonny back for that time he shot Dante! What goes around comes around in GH history.

General Hospital fans won’t want to miss the dramatic moments ahead. We’ll give you updates as other GH details emerge. Stay tuned to the ABC soap and don’t forget to check CDL often for the latest General Hospital spoilers, updates and news.