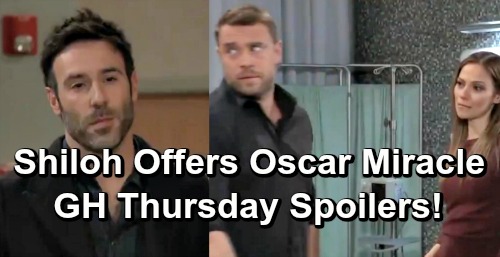 General Hospital (GH) spoilers for Thursday, March 14, tease that Anna Devane (Finola Hughes) will grow frustrated over her memories. She still doesn’t know which ones are her own and which ones belong to her sister, Alex Devane Marick (Finola Hughes). Dr. Hamilton Finn (Michael Easton) won’t have the answers either, but he can at least listen to Anna rant and offer support.

Over with Harrison Chase (Josh Swickard), he’ll look intrigued as he talks to Willow Tait (Katelyn MacMullen). Chase will mention an idea and ask if that’s something Willow would want. This will probably involve moving their relationship along a bit. Chase may want to make sure they’re on the same page about being exclusive.

GH spoilers say Chase may plan a weekend getaway soon, so that’s another option here. Chase might present the possibility to Willow and seek her opinion. Elsewhere, Kristina Corinthos (Lexi Ainsworth) will get into an argument with Sam McCall (Kelly Monaco) and Molly Lansing-Davis (Haley Pullos). She’ll take Shiloh Archer’s (Coby Ryan McLaughlin) advice when they badmouth Dawn of Day.

Kristina will snap that if her sisters can’t respect the choices in her life, then they don’t get to be in it. Sam and Molly will wonder if Kristina would seriously cut them out. They’ll push Kristina to be reasonable, but she’ll feel like they’re trashing Shiloh and everything she’s come to believe in. Molly will fret about Kristina after this confrontation, but there won’t be much she can do until Kristina wises up.

Meanwhile, Shiloh will surprise Drew Cain (Billy Miller) and Dr. Kim Nero (Tamara Braun) at GH. He’ll overhear them wishing for Oscar Nero’s (Garren Stitt) miracle, so he’ll suggest miracles are a lot more common than they think. Kim is a doctor who prefers scientific facts over the new age-y techniques DoD pushes. She won’t be interested in what Shiloh has to say, but that won’t stop him from saying it.

Other General Hospital spoilers state that Lulu Falconeri (Emme Rylan) will grow suspicious. During a conversation with Laura Webber (Genie Francis), Lulu will realize her mom’s in no hurry to invalidate the divorce. If she pries the details out of Laura, Lulu may be just as upset over Dr. Kevin Collins’ (Jon Lindstrom) actions. He unleashed deadly Ryan Chamberlain (Jon Lindstrom) on Port Charles!

Next, Ava Jerome (Maura West) will approach Kevin on a mission for vengeance. She’ll believe he’s Ryan, but it doesn’t really matter since Kevin deserves this outburst, too. Ava will call him an SOB and deliver a hard slap to Kevin’s face. He’ll know how much pain he’s caused, so he’ll take whatever Ava dishes out.

Kevin will want Ava to understand how sorry he is, but there’s no way she can forgive and forget – especially since she’s too drunk to even know which twin she’s talking to. Of course, Sonny Corinthos (Maurice Benard) will continue his Dante Falconeri (Dominic Zamprogna) mission offscreen. It looks like Sonny won’t pop again until Friday or possibly Monday due to a recent preemption.